See the famous Amboseli elephant herds move across the plains against the backdrop of snow-capped Mount Kilimanjaro...

Amboseli, Chyulu Hills and Tsavo are three separate and distinct game parks in the south-east of Kenya. All have fabulous views of Mount Kilimanjaro, and you can link all of them in one safari. But each is different. And so you can treat each one as a stand-alone destination as well.

Amboseli National Park is generally flat savanna grassland dotted with acacia shrub and stands of fever trees. Game is plentiful with buffalo, zebra, wildebeest, gazelle, giraffe, lion and cheetah all here. Plus you can see the smaller mammals such as the ever-present black backed jackals, spotted hyena and bat eared foxes.

Towards the centre of the park are a series of marshes fed by underground channels carrying melt water from the glaciers of Kilimanjaro. These waters are the only permanent water source for miles around.

Marshland birds include pelicans, kingfishers, crakes, egrets, hammerkops and even the rare Madagascar squacco heron. So far, 47 raptors have been identified, including the rare taita falcon and southern banded harrier eagle.

Our recommended Amboseli safari camps include Tortilis Camp and Amboseli Porini Camp. Nearby, in the Chyulu Hills, is one of the best safari experiences in Kenya, Ol Donyo Lodge.

Travel further and you reach the Tsavo West and Tsavo East National Parks. Tsavo is so vast that it is separated into two separate parks. These are bisected by the Nairobi highway to the coast. And also the famous railway linking Nairobi with Mombasa

When to visit Amboseli & Tsavo

Amboseli lies on the edge of the inland plateau at 1180m (3,700ft). However this lower altitude means that it is hotter and drier than the Masai Mara. This yields the characteristic dry savanna plains. Overall it rains less here (700mm less annually than the Masai Mara). The summer has hot 30C days and pleasantly warm nights with only occasional afternoon showers.
TALK TO US
AVG RAINFALL 69 mm
MAX TEMP 30 ℃ / 86 ℉
MIN TEMP 16 ℃ / 61 ℉

The long rains here take the form of hard afternoon showers and they make park roads more tricky to navigate. It is not the ideal time to visit, though there is less rain than in the Mara.
TALK TO US
AVG RAINFALL 204 mm
MAX TEMP 27 ℃ / 81 ℉
MIN TEMP 17 ℃ / 63 ℉

This is the best time to visit for your safari. This is the slightly cooler and driest time of the year with pleasant daytime temperatures but cool nights. Though it is generally dry, it can rain at any time in the Mara.
TALK TO US
AVG RAINFALL 23 mm
MAX TEMP 24 ℃ / 75 ℉
MIN TEMP 14 ℃ / 57 ℉

November is the time of the less intense short rains. However the rain comes as afternoon or night showers so there’s plenty of sunshine as well.
TALK TO US
AVG RAINFALL 88 mm
MAX TEMP 28 ℃ / 82 ℉
MIN TEMP 16 ℃ / 61 ℉ 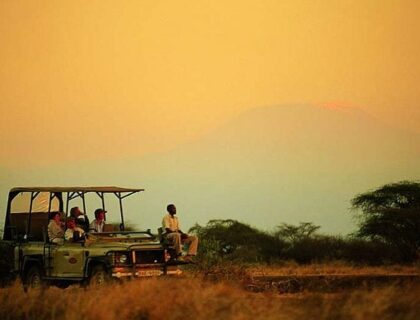 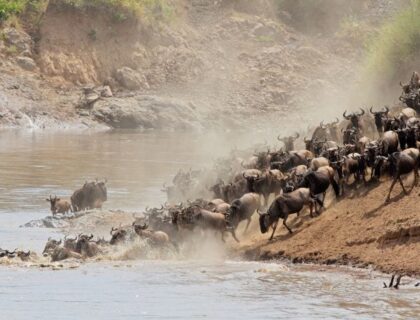 The Elewana Sky Safari in Kenya includes a visit to three of the most popular wildlife areas and you stay in first class hotels and safari lodges. Travel is in a dedicated Elewana executive light... 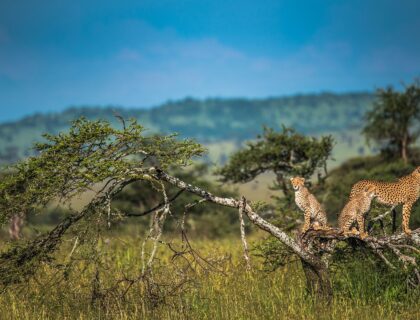 The East African Exploration is an affordable 12 night overland migration safari crossing the border between Kenya and Tanzania. 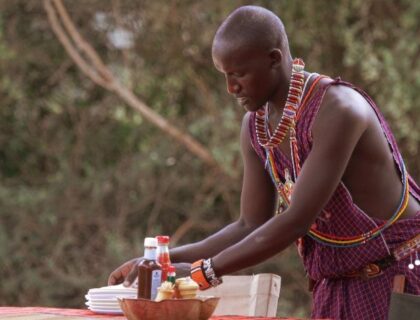 6 nights/7 days old-school tented safari to Amboseli and the Masai Mara. This is a high quality safari - just with simple accommodation. 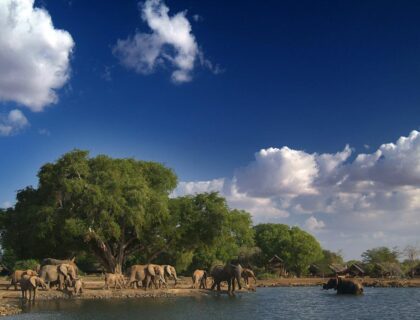 Out Of Africa Air Safari

The 7 night Out of Africa Air Safari is probably the best value air safari package in Africa, with scheduled weekly departures on Saturdays which bring the luxury of a very high-end private flying... 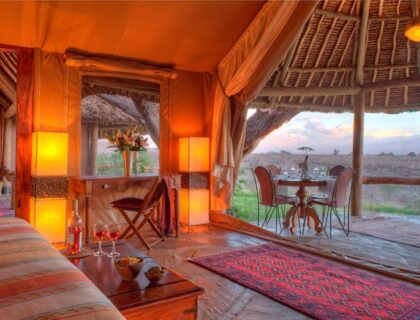 Tortilis Camp is named after the flat-topped, umbrella thorn tree, the Acacia Tortilis, and is situated in one of Amboseli's areas of Acacia Tortilis woodland, with the majestic backdrop of... 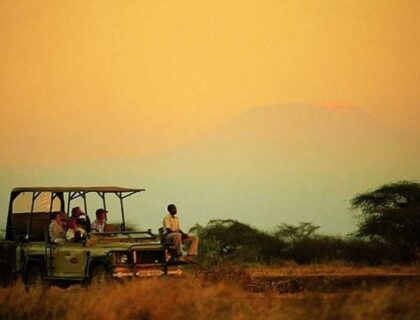 Porini Amboseli Camp is a charming intimate little camp with the feel of a traditional luxury safari camp of bygone times, set in the Amboseli eco-system within the exclusive Selenkay Conservancy. 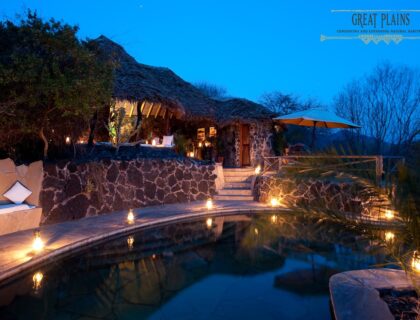 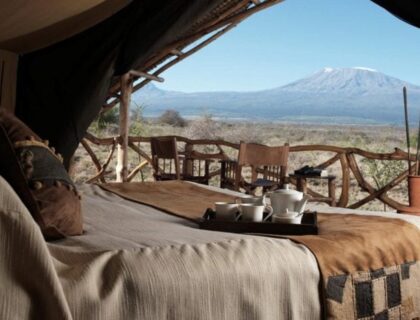 Satao Camp takes you back to the timeless "Out of Africa" safari with canvas tents, bush showers and personal and friendly service evoking a feeling of the true ‘Old African’ experience. The ... 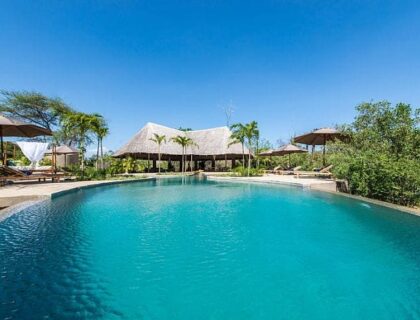 WHAT AN AMAZING SAFARI! An outstanding job!

"WHAT AN AMAZING SAFARI! An outstanding job you did! Thank you for planning and organizing the Safari it will forever be in our memories. The accommodation and the food were fantastic. Amboseli was stunning, although it would have been great to see Mt Kilimanjaro it was cloudy… Mrs Carol Ndungu " Mrs Carol Ndungu
Did you know 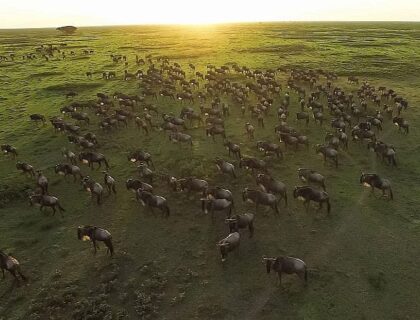 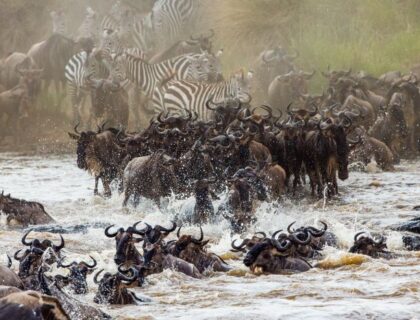 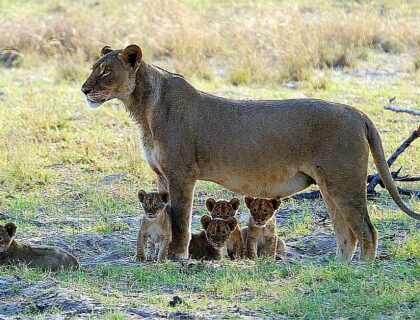 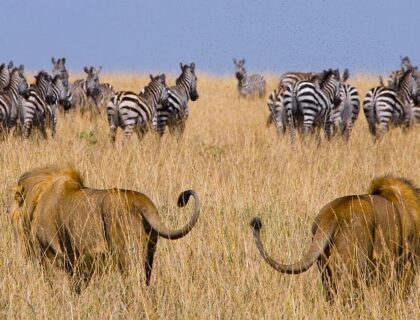 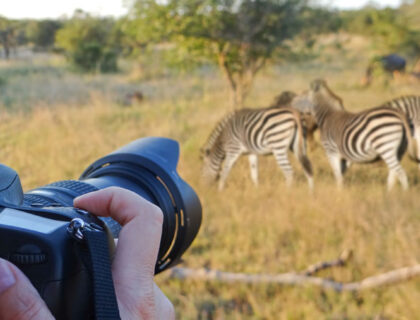 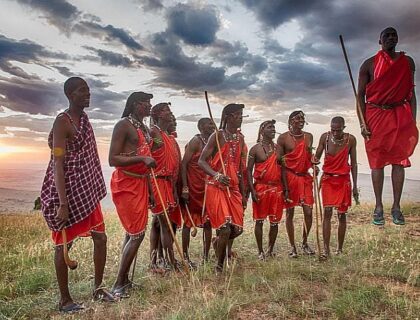 The Maasai and your Migration Safari

Not such untouched land. . . The Serengeti is ‘a wilderness’ only to the extent that no commercial roads cut through it. There are virtually no roads in the adjacent village lands either. So...