Here is a photo blog of a few of my amateur shots from a recent safari to Victoria Falls and Hwange in Zimbabwe. I think it’s useful to show how close you can get to the wildlife. And also the sort of shots that are possible by amateurs (I have included a couple of shots from Mark Butcher, our host on the trip).

I haven’t described the lodges as the camp links take you to our full description. Rather, I aim to give a sense of what it’s like on safari.

Victoria Falls and the Zambezi River

We began with a night at the lovely Zambezi Sands River Camp right on the banks of the Zambezi River. (click here for my candid review of Zambezi Sands…)

We were game-viewing before we even got to the lodge. With sightings of elephant, buffalo, zebra, giraffe and some lionesses relaxing under the shade of a tree…

One of my favourite activities at Victoria Falls has got to be canoeing on the upper Zambezi. I first went canoeing here far too many years ago to mention, but the magical combination of languid paddling with the occasional shot of adrenalin-inspiring rapids never fails.

(Shot of us taken from the riverside track)

The Zambezi river is vast and much of the time you are floating along. Looking at the kingfishers on the river bank, silently paddling past grazing elephants and keeping a watch-out for hippos. But every now and then the river divides into a number of tributaries and you find yourself negotiating some small rapids. However the canoes feel very stable. So actual fear did not tinge the adrenalin rush.

We were in good hands as two expert river guides accompanies us. They were adept at getting us back on track if we had gone slightly off course. (This happens when your partner insists on trying to steer from the front … never a good idea in a canoe, but I digress).

The following morning we enjoyed a fantastic walking safari followed by a brunch by the riverside.

Then it was onto Victoria Falls!

Though not the most epic shot of the Falls, it does convey the sheer power and quantity of the water flowing over, especially at this time of year (May).

We then headed to Gorges Lodge, which has one of the most epic settings of any lodge in Africa.

Later in the afternoon we enjoyed watching the nesting black eagles as they soared above the Batoka Gorge.

I learnt that it’s very difficult to take a good photo of an eagle in flight with a long lens. I have to practise some more. So I have to confess that this photography is by our host, Mark Butcher of Imvelo Safaris.

After sundowners overlooking the gorge, we enjoyed (and participated in) a wonderful display of dancing from the local village. I am sometimes ambivalent about dancing displays. But in fact this group from the local village had approached the lodge to ask if they could perform every few nights and it was very enjoyable.

The following morning I was up early to capture the sunrise over the gorge. This is literally the view from my terrace.

Next we left Victoria Falls, somewhat sadly, and headed south by road to Hwange National Park, only two hours drive away (to the main gates).

Hwange National Park is Zimbabwe’s largest and oldest game park. Its varied vegetation results in a diversity of game, from the dry southern acacia trees bordering the Kalahari to the woodlands, valleys and granite hills characteristic of the north.

Hwange Park is big game country with massive herds of elephants, especially visible at the end of the dry season. As well as lion, cheetah, buffalo, hyena, giraffe, zebra, wildebeest, and the rare majestic sable antelope.

Once we arrived in the Hwange area, we climbed onto a different mode of transport for the trip to the camp.

Imvelo Safaris have come up with a unique way for you to arrive on safari in style. They have built a railcar (a sort of one carriage mini-train) which travels on the railway tracks from the Main Camp all the way down to Bomani and Camelthorn lodges. (approx. two hours with lunch and drinks served en route).

As we got further south, we saw plenty of game from the train. Some even crossing the railway tracks – elephant, giraffe, wildebeest, zebra, sable and plenty of monkeys to name but a few.

(Trying out my long lens…)

We arrived at our stop for Camelthorn Lodge in the later afternoon. We immediately stepped from the train onto a game vehicle ready for an afternoon game drive. The drive got off to a spectacular start as we found a cheetah with her five cubs. We saw them again the following day when this ‘super-Mum’ had successfully hunted an impala and there was plenty of food for the cubs.

The drive ended with the customary sunset drinks. The beauty and majesty of Hwange was all around us with three groups of elephant on the plains, giraffe and zebra in the distance.

(Sips greeting us for drinks)

The following morning, after a very enjoyable (and late) night around the campfire, we were up early to visit the local village and school. We met the children as they walked to school, chatting about their favourite subjects and what they wanted to be when they grew up.

The school, and three others in the area, receives direct contributions from the camps. The village as a whole benefits from rents paid to them as Camelthorn is built on their community land adjacent to the park.

I really enjoyed visiting the school, hearing them sing their local songs and also spending some time chatting with the kids. Getting to grips with the Ndebele language and also teaching them a little about my home country.

After a bush brunch we returned to the school to assist with their food programme. Often lunch provided by the school is the only solid meal that the children get. It was very humbling to witness the good work done. Here is yours truly getting stuck in…

After a lovely siesta we moved onto Bomani Tented Lodge, which is close by. Enjoying a game drive en route, including seeing the cheetah and her cubs again, as well as wonderful giraffe, zebra and elephant sightings.

That evening we were called away from coffee around the campfire to enjoy a night drive to view lions on the hunt. They had been seen moving close to camp, interested in a herd of buffalo. So we jumped into the vehicle to see if they would be successful. The lions slowly followed the herd for some time but the buffalo caught smell of them and took off.

Bush walks with a difference

Bush walks usually involve you walking in silent single file at a relatively sedate pace as your guide keeps a keen eye out for what is going around you. However on this safari I found myself moving in ways I have never done before!

On one drive we came across a pack of wild dog. Our guide asked whether we wanted to get closer “on foot”. I put this in brackets as that’s not really what we did. What he asked us to do was to get off the vehicle and sit on the ground behind so that when the vehicle slowly moved away we were stationery and seated in front of the wild dogs. Which at this point were still some way away.

Now we had to get closer. This we did by slowly inching forward using our hands, bums and feet. Not as easy as it sounds, and certainly not elegant. I adopted a very curious sidewards bum shuffle which thankfully you cannot see in this photo. All this, whilst keeping a watchful eye over the wild dogs. They were aware of us but the key was to move closer without them becoming so alarmed that they would run away. We were pretty successful with this as you can see.

Another time we went on a bush walk to try to get close to a herd of buffalo. The key thing would be to get up wind of them so that they did not get scent of us. We also needed to be away from their line of movement so that if they did decide to run en masse we would not be doing our own DIY version of the Pamplona Run.

Sounds simple right? Not if the buffalo are slightly wary because of some lions hunting them on the previous evening. The buffalo kept moving and so did we. At first our sedate bush walk became a root march, then a trot and then – in order to get up wind and out of sight, a run. Finally we were rewarded with a good pretty close up sighting of the buffalo.

Another highlight of our southern Hwange trip was the elephant ‘blind’. It is a semi-underground hide camouflaged as a termite heap!

The photographic opportunities from the hide at Stoffie’s Pan are dramatic. Elephants can be photographed from toe-level silhouetted against the sky. Such close proximity to Hwange’s huge bulls is breath-taking.

Our final stop was Nehimba Lodge, in the north-west of the park. This allowed us to see a completely different side of the park, more wooded and hilly with stunning views. En route we had wonderful sightings, including some giraffe starkly silhouetted in the water…

Nehimba is a luxurious comfortable lodge. (see my first-hand review here) What really makes it is the amazing elephant sightings close to the lodge when the elephant come to drink from the waterhole and also the lodge’s swimming pool.

This photo blog is courtesy of Cedarberg Africa

Feel free to contact us if you want us to plan the perfect getaway for you. 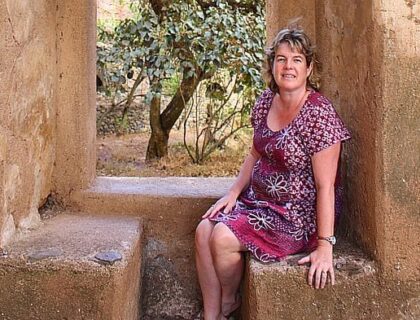