Etosha National Park is one of Africa’s premier wildlife reserves: plenty of big game against the scenic backdrop of Etosha’s salt pans, pink with flamingos in the wet season.

Etosha National Park in northern Namibia is one of the finest wildlife parks in Southern Africa. It’s certainly one of Namibia’s most iconic destinations. Etosha means ‘Great White Place’ in Herero, an apt description of this park as it encloses a vast saltpan. Dry and shimmering for most of the year, the pan fills with water after good rains. Then it forms an immense, shallow lake attracting great numbers of flamingos and other water birds. In the dry season the perennial springs and waterholes attract the wildlife as they are a much-needed water source for the wildlife.

During the dry season in Etosha (which is generally from late April to mid November), the flat open plains are home to tens of thousands of animals. Large herds of springbok, gemsbok, zebra, wildebeest, giraffe and elephant gather around these waterholes. The ever-hungry predators follow them – particularly cheetah and lion. The diminutive Damara dik-dik is one of the rarer, but delightful, sightings in Etosha. Raptors such as the bateleur eagle, pale chanting goshawk and red-necked falcon are fairly common.

An Etosha safari can be undertaken using your rental car. Or you can stay at one of the private Etosha safari lodges on the edge of Etosha and join their guided game drives instead. 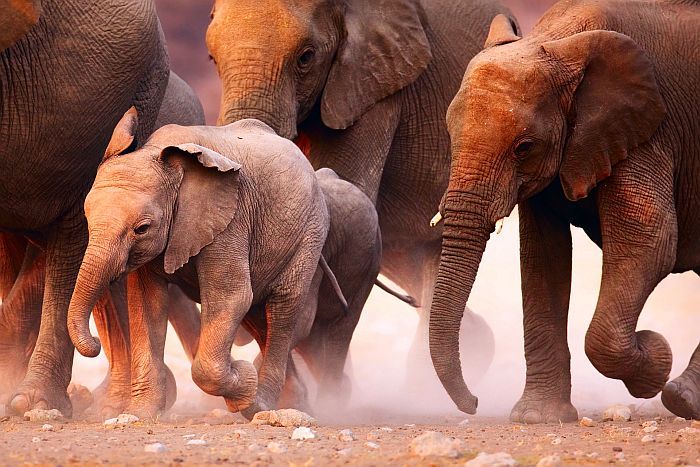 Animal Movements at the start of the rainy season

Note that after the first summer rains (typically sometime in November), much of the game moves away from these waterholes and nearby plains, which have been eaten to almost nothing. They head for the open plains in the north of the reserve which will now have a fresh supply of new grass. Here you cannot follow, as there are no roads.

Thus game-viewing on an Etosha safari will be noticeably quieter during this time. It is still worth a visit as many plains species remain on the southern plains. Plus at this time they give birth to the season’s young after the sporadic rains. But don’t expect vast herds of game, especially elephant.

When to visit Etosha

This is the rainy season in Etosha. The start of the rains heralds the low season in Etosha as the wildlife can disperse widely across the vast northern plains (and no longer need to come to the waterholes to drink.) Some even leave the park and head north into Ovamboland. So it’s not the ideal time for an Etosha safari. However in some years after good rains, the Pans actually fill with water which attracts flocks of flamingos. It’s a beautiful time of year as the park is lush and green, animals are being born and the skies are dramatic.
TALK TO US
AVG MONTHLY RAINFALL 109mm
AVG HOURS OF SUNSHINE 9 Hours
MAX TEMP 30 ℃ / 86 ℉
MIN TEMP 18 ℃ / 64 ℉

Start of the dry season

This is considered the start of the dry season as the summer rains fade away in April. The landscape is still green and lush but the grasses start dying right back. The sunsets are superb as the skies are clearer. The game-viewing is not as prolific as later in the dry season and the slightly lower safari prices reflect this. But it is still an excellent time to visit.
TALK TO US
AVG MONTHLY RAINFALL 40mm
AVG HOURS OF SUNSHINE 9.5 Hours
MAX TEMP 25 ℃ / 77 ℉
MIN TEMP 12 ℃ / 54 ℉

Traditionally this is the best time to visit as the dry season continues. The grass is very short so spotting game is easy. And the animals flock to the waterholes to drink. But the safari visitors also flock! So it can get a little crowded around the waterholes. And as the dry season continues, it gets very dry and dusty on the park roads. Note that June and July night-time and early morning temperatures can be very chilly in Etosha given its semi-desert climate.
TALK TO US
AVG MONTHLY RAINFALL 1mm
AVG HOURS OF SUNSHINE 10.5 Hours
MAX TEMP 24 ℃ / 75 ℉
MIN TEMP 8 ℃ / 46 ℉

Temperatures heat up quickly in late September and October prior to the start of the summer rains and easily get to 33-35C. Somewhere in late October or November, the summer rains start. This leads to a fairly dramatic change in game-viewing as the wildlife disperse across the northern plains of Etosha and away from the park roads.
TALK TO US
AVG MONTHLY RAINFALL 38mm
AVG HOURS OF SUNSHINE 10.5 Hours
MAX TEMP 33 ℃ / 91 ℉
MIN TEMP 18 ℃ / 64 ℉ 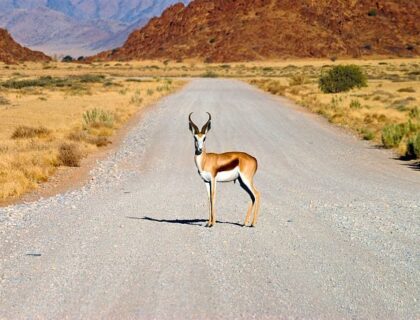 This three week self drive holiday visits some of the scenic highlights along the West Coast of South Africa and then takes you through Namibia up to Etosha National park to end in Windhoek. 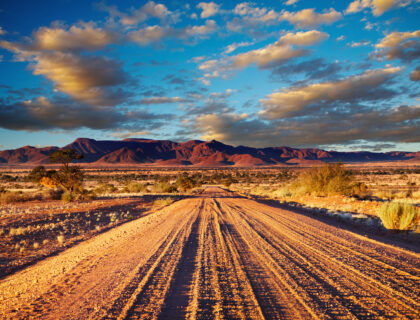 This shorter self-drive tour, using premier accommodation, is ideal for the first time visitor to Namibia who may want to combine Namibia with either Cape Town or a safari Botswana. It is... 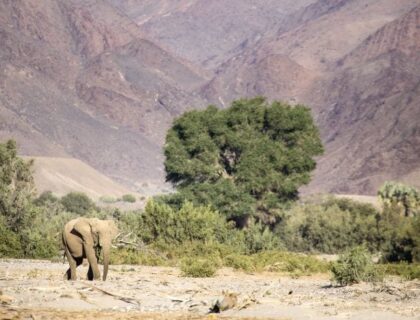 This escorted tour is designed to not only visit Namibia's highlights such as the Namib Desert, Sossusvlei, Swakopmund and Etosha National Park, but also to explore some of the further reaches of... 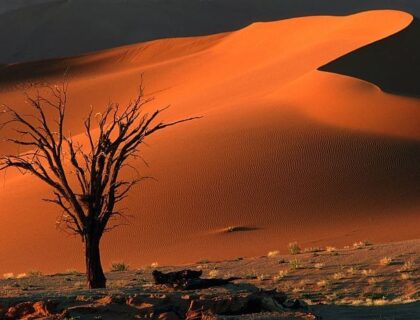 This luxury self-drive tour combines general touring of Namibia with a superb safari experience, and is ideal for the first time visitor. Highlights include Etosha National Park, Damaraland,... 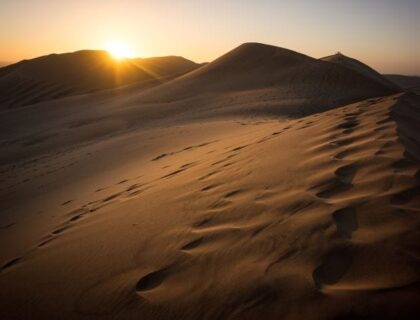 Namibia in a Nutshell Safari

This 10 night safari is ideal for those who don't have much time yet and want to see most of the highlights of this vast desert country. The scenic flights between the lodges are very much part... 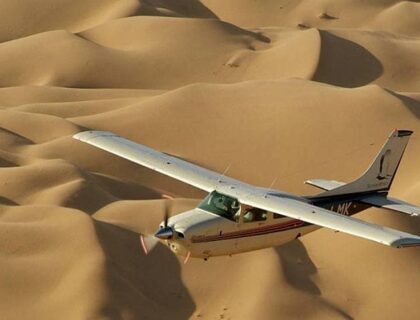 This luxurious fly-in safari connects some of the most enchanting highlights of Namibia: Sossusvlei, Swakopmund, Damaraland and Etosha National Park. It’s ideal for those who don't have much... 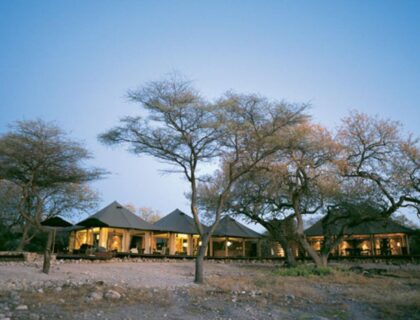 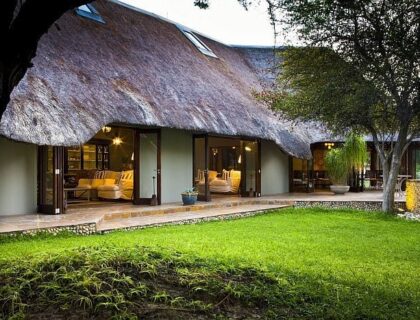 Mushara Lodge & its uber-luxurious villas, has a prime position 8km from Etosha and is known for its delicious Namibian cuisine and friendly efficient service. This is one of our favourite bush... 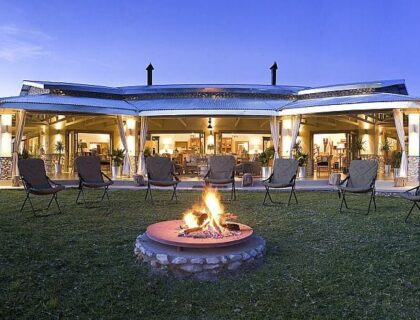 Mushara Outpost is all about old-fashioned hospitality with friendly and personalized service offered at the edge of the Etosha National Park, only 10km from the park gates. Mushara Outpost... 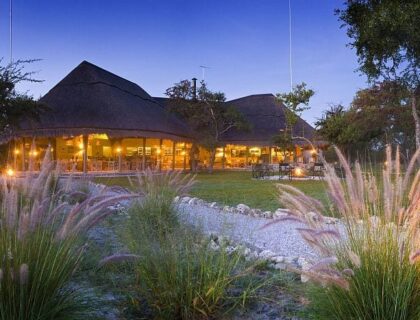 Mushara Bush Camp is a true bush camp on the doorstep of Namibia's magical Etosha National Park, only 10km from the park gates. It is a truly family-friendly safari camp offering a down-to-earth... 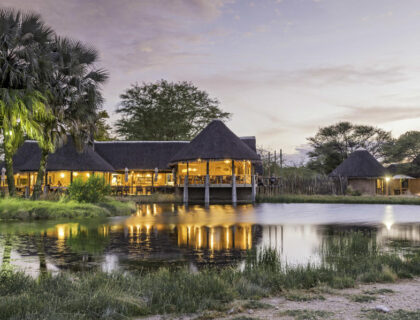 Onguma Bush Camp is a comfortable family-friendly bush lodge in the Onguma private game reserve which borders Etosha National Park to the east. It makes for a well priced alternative to staying... 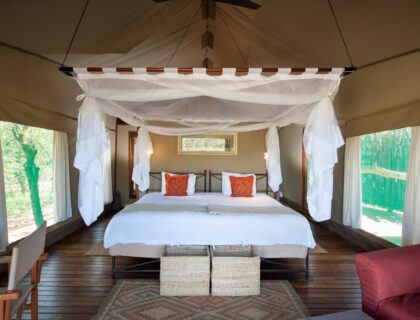 Ongava Tented Camp is tucked into a hidden valley at the foot of a dolomite hill in the Ongava Game Reserve, a private 30,000ha game reserve on the southern boundary of Etosha National Park....

Onguma Bush was a great lodge with wonderful staff and vibey atmosphere. Even though it is relatively large, there are separate lounge areas where you can sit and look out over their waterhole in front of the deck. This waterhole is generally quite rewarding. Whilst we were at dinner, a large group of zebra came to drink in front of us.

The bedroom is quite spacious, but the bathroom is fairly small and utilitarian. The toilet was not enclosed. There was Air-con in all rooms which was appreciated.
The food was good with a great variety on offer. Their boma dinner was set up at Etosha Aoba, their sister camp, as a lion had temporarily taken up residence in their boma at bush camp! Great selection on offer for every dietary requirement.

Onguma has a wonderful new option called The Dream Cruiser. This is basically a romantic sleep-out option, but with a twist. The sleep-out is in a converted landcruiser with sleep-out on the roof and ensuite bathroom down in the back of the cruise. This is a brilliant  idea as it's mobile so they choose different spots near the waterhole depending on whether it is summer or winter. The deck is actually quite spacious and the bathroom is great with a fully functioning hot shower & flush toilet. As it is weather dependent, you can only book this alongside a room at one of the Onguma lodges.

Note: Its only for couples (2 pax) on a double bed – no space for kids. 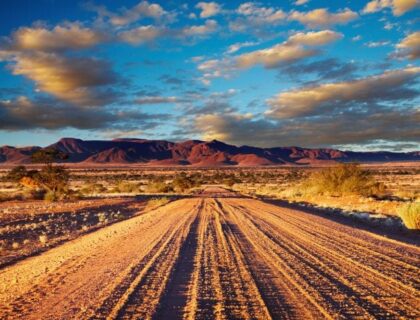 Adventurous Self Drive – bringing out your inner Camel Man… We’ve being offering self-drive safari tours in Namibia and South Africa for over 25 years, so we’ve planned plenty of more... 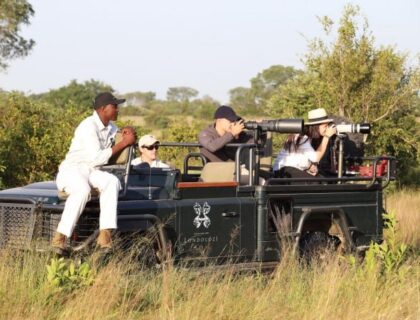