Tintswalo Atlantic has an exceptional location in Cape Town. Situated on the water's edge just off the picturesque Chapman's Peak drive on the Cape Peninsula. This ultra-stylish and romantic retreat looks out over Hout Bay towards the towering peak of The Sentinel, bathed in pink and purple at sunset. Nestled unobtrusively between the Atlantic and the slopes of the Table Mountain fynbos reserve, Tintswalo Atlantic offers absolute seclusion and relaxation, with the ocean literally a stone's throw away from the pebbled beach! Whale watching is an effortless activity between July and November.

This is the perfect destination for visitors wanting to relax right beside the ocean - either at the start of their holiday or at the end after a few days on safari. Though it is not close to the city centre - 25 mins drive to the city and the Waterfront, its unique location means that you are well placed to explore the many attractions of the Cape Peninsula as well as Kirstenbosch gardens, the picturesque village of Hout Bay and the Constantia wine estates all nearby. Alternatively you don’t have to stir from this oasis - just lie by the swimming pool, or enjoy a drink on the terrace listening to the gently lapping waves.

The 10 suites and the two bedroom Presidential Suite are authentically decorated to emulate the experiences and colours of various well-known islands of the world. The air-conditioned suites are quite literally, situated on the edge of the Atlantic Ocean. The suites offer supreme comfort and privacy with extra length beds, air conditioning and a private deck. Spacious en-suite bathrooms, all with double basins, large showers and bath also enjoy an uninterrupted marine view.

Tintswalo Atlantic is the only lodge within this fynbos reserve, known worldwide for its extraordinary rich and diverse fauna and flora. No trees were removed and not so much as a branch was cut from the Milkwood trees that grace the shoreline.

In the Shangaan language, Tintswalo means "the intangible feeling of love, gratitude and peace bestowed upon someone offering you a meaningful and worthy gift." I think that about sums it up! 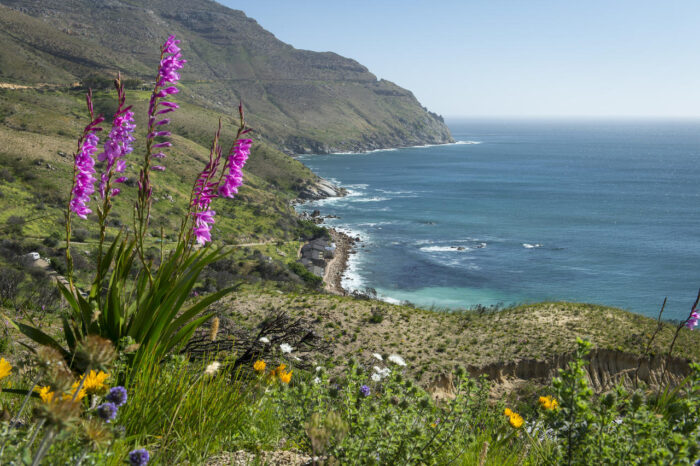 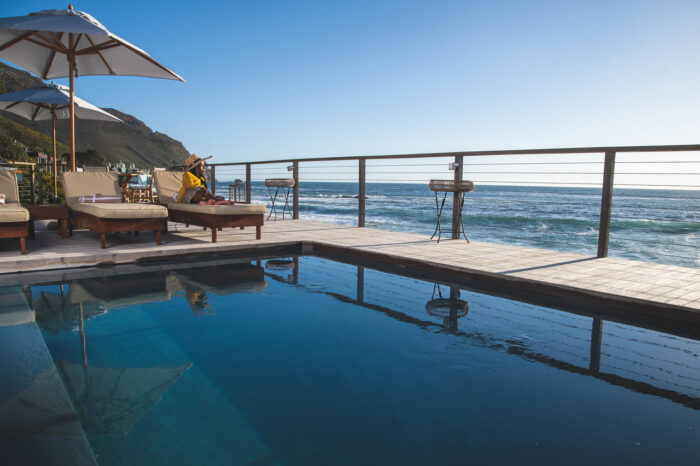 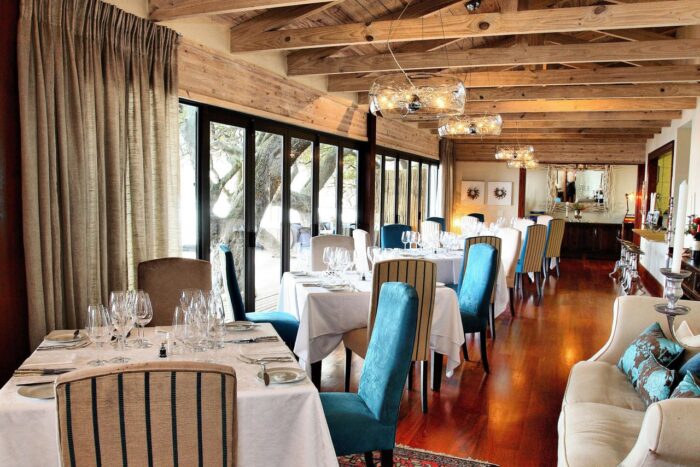 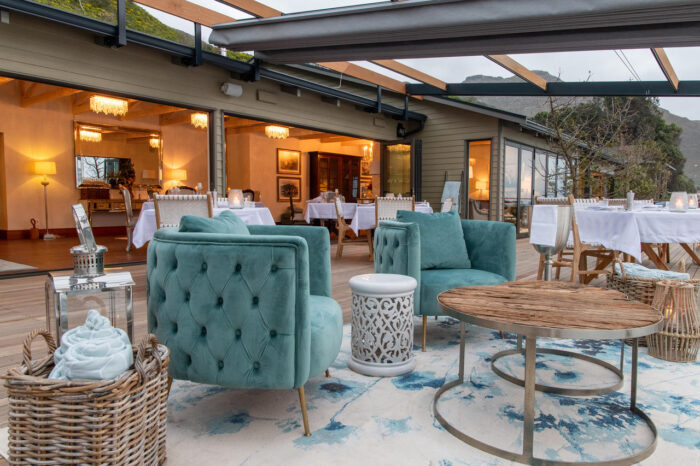 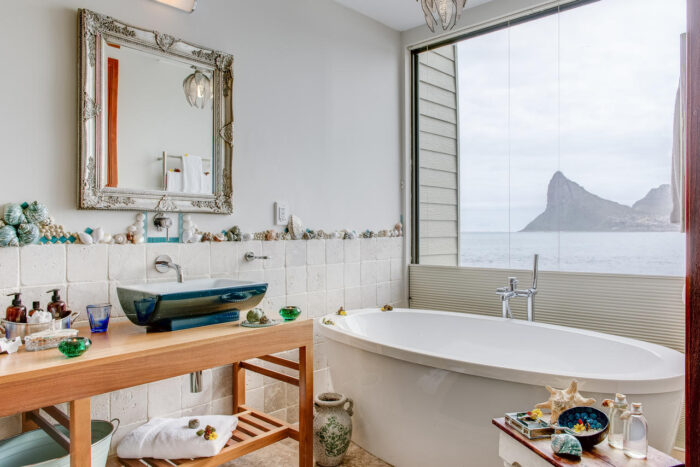 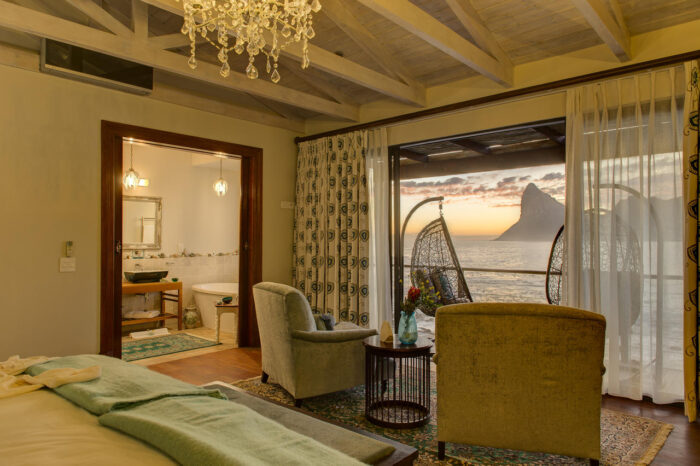 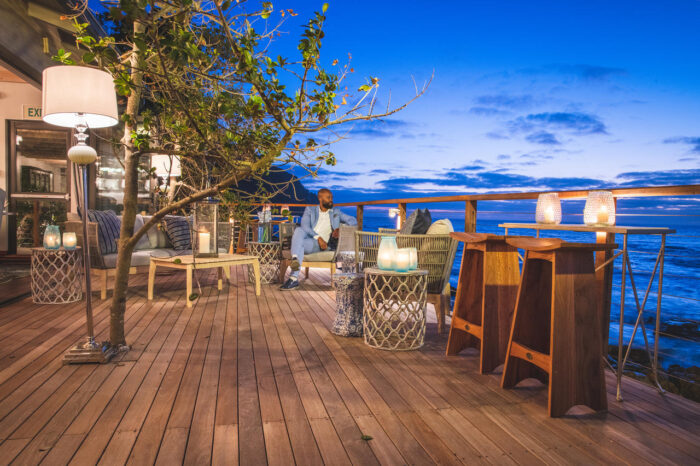 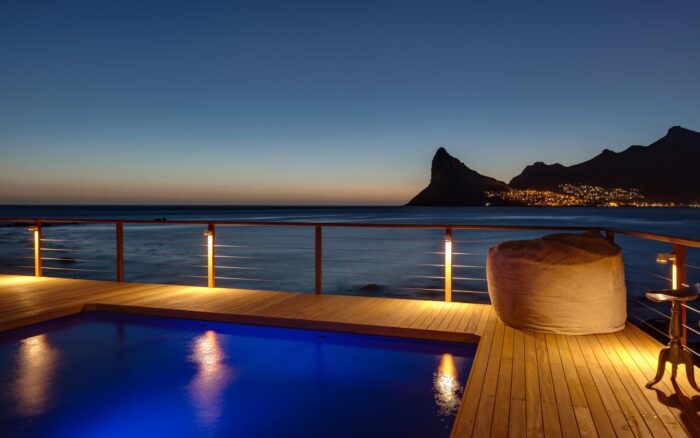 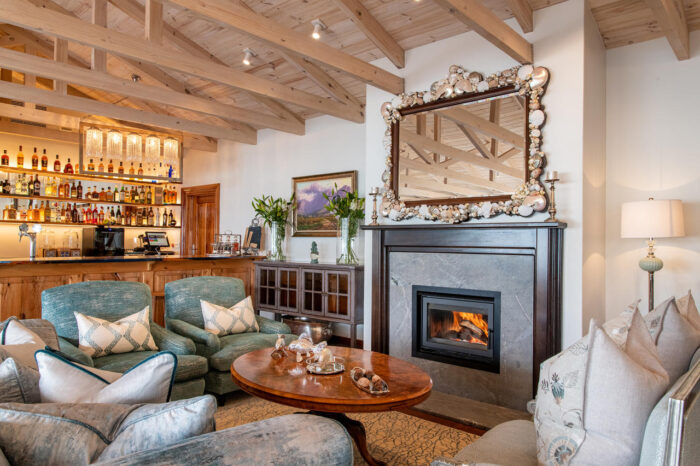 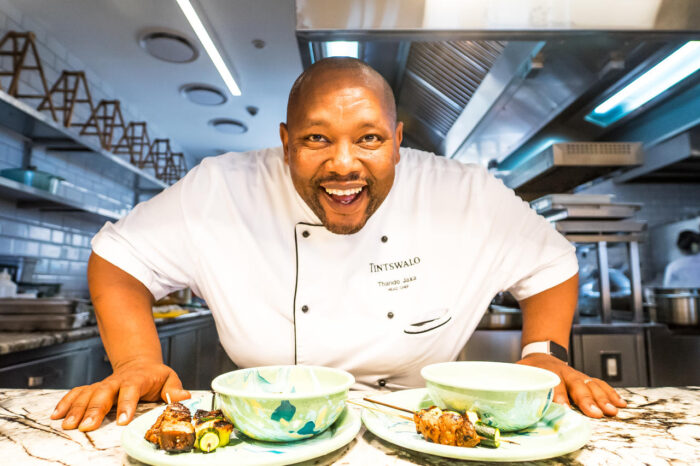 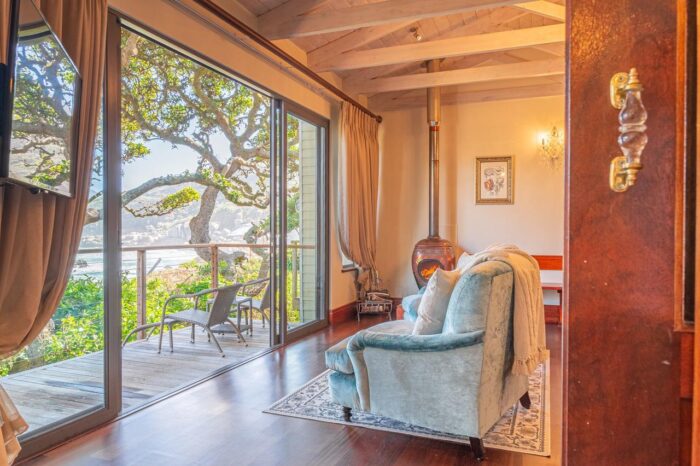 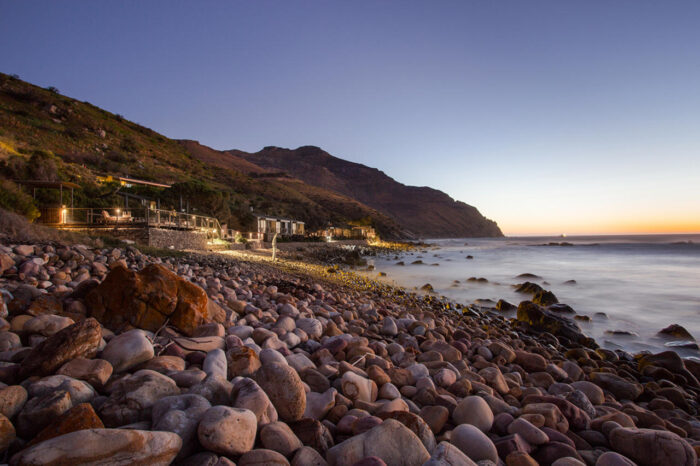 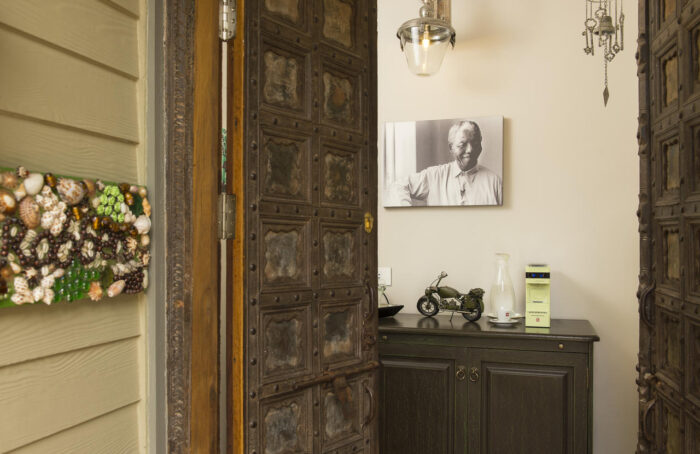 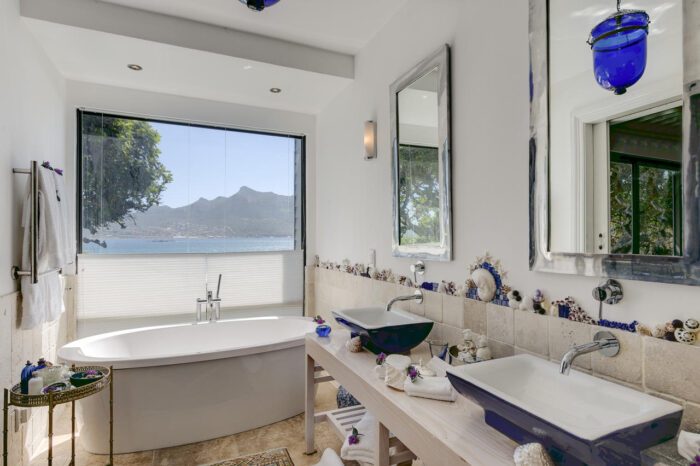 Tintswalo Atlantic on the map

The Robben Island Suite pays tribute to South Africa’s first democratically elected president, the esteemed Nelson Mandela who was imprisoned on Robben Island for nearly 24 years. It provides a quirky and yet very real reminder to those who wish to reflect on South Africa’s transition and the legacy that our beloved Madiba left for our nation. 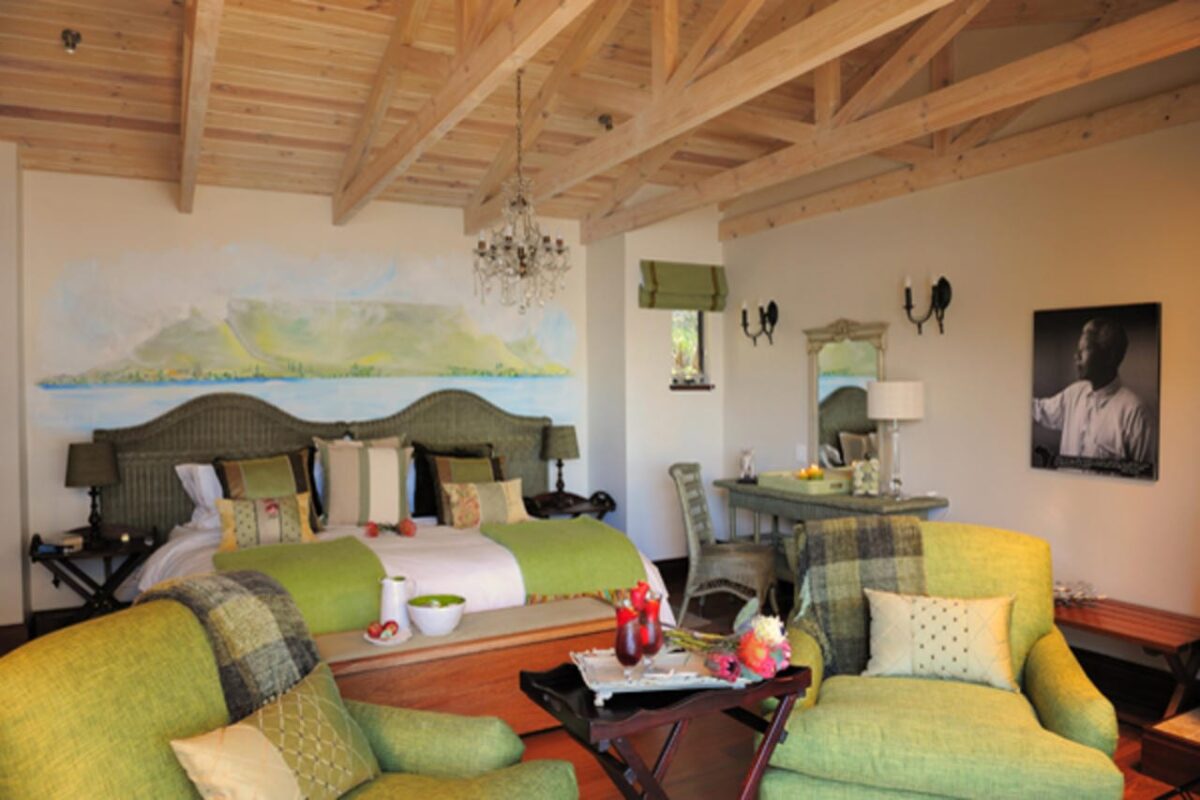 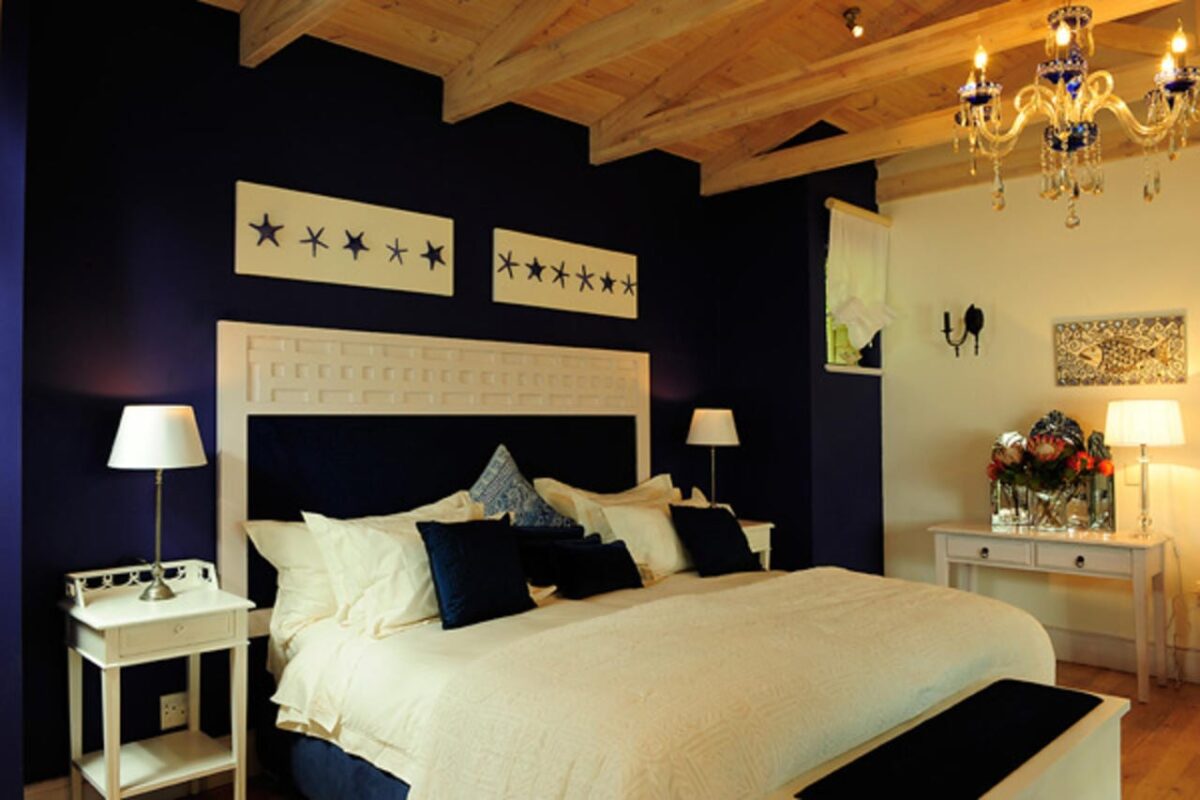 A Swahilian island just off the east coast of Africa, was formerly a penal colony. It has special memories for the owners who have visited it. It showcases the fun, natural and organic elements that typify this stretch of coastline.

The famous Italian island of Sicily is a little “on the side”, and has a distinct style and persona all on its own. The suite for which it is named pays tribute to classic Italian style, with elegance, understated colour and delicate finishing touches. 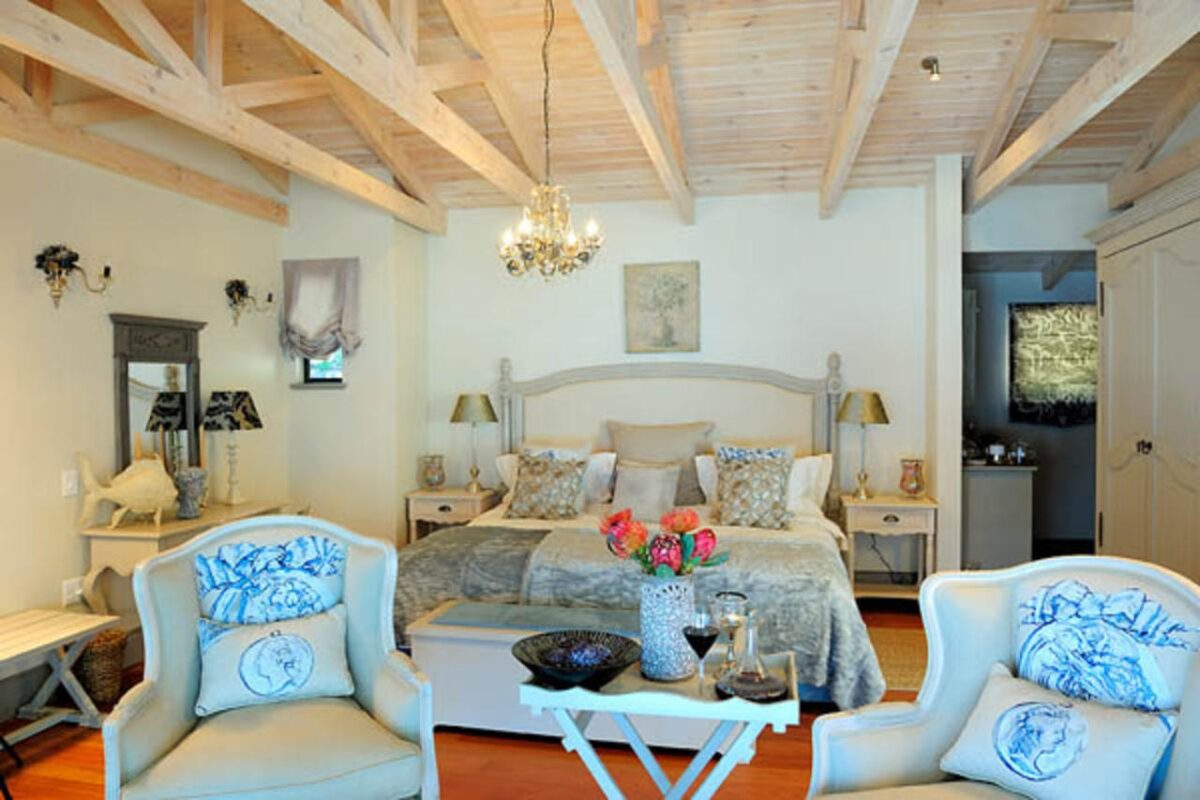 Il-Sainte Marie is a beautiful island off the coast of Madagascar. The island suite enjoys a unique, subtle colour pallet, in keeping with the serene, little-known Madagascar destination. Striking in its inspired use of glass and light, this is the most feminine suite of the Tintswalo Atlantic collection.

Cousine Island is a Seychelles Island famous for the beautiful species of shells, fish and marine life that it provides sanctuary to. The aqua colours used in the design of the suite are reminiscent of the beautiful colour of the sea in and around its coral reefs. 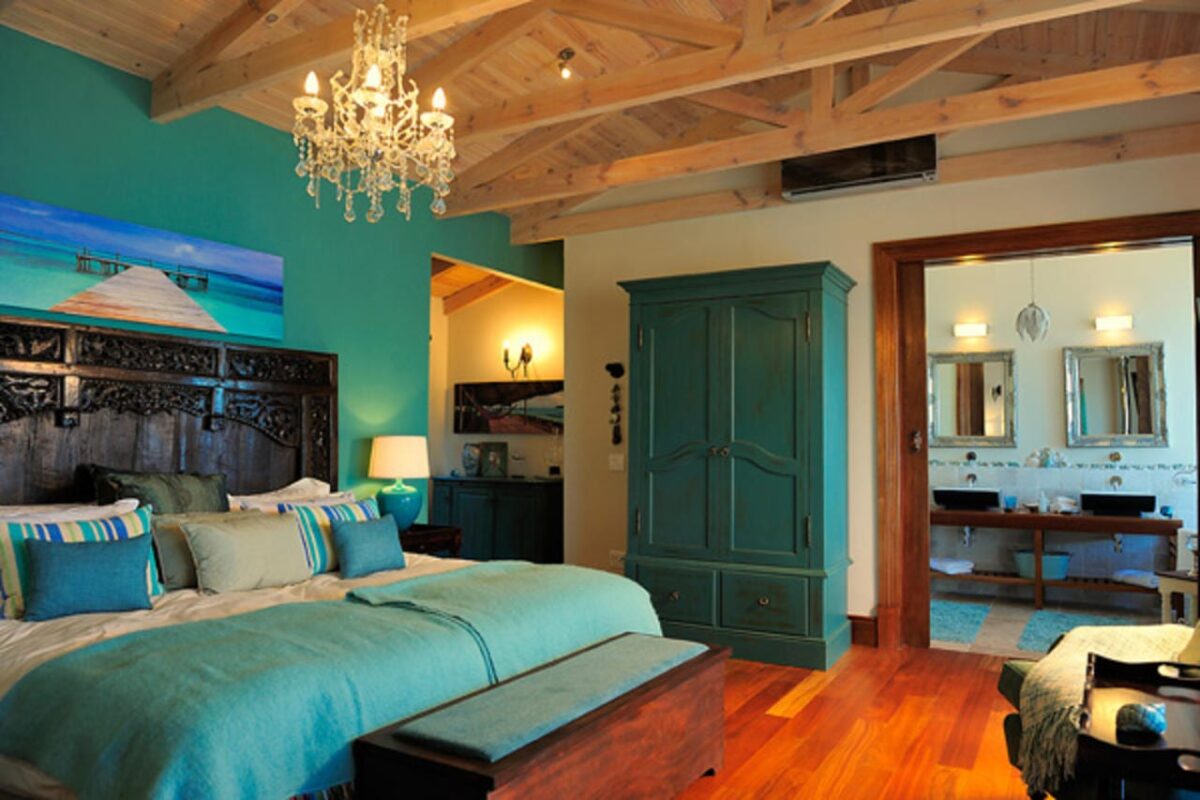 Our newest suite, previously Madura Island Suite - Java Island is an Indonesian paradise, situated between Sumatra and Bali. The most populous island in Indonesia, Java is a hive of culture and activity, and home to the bustling, modern city of Jakarta.

The Java Island Suite captures the contrast of dark wood and ocean blue, and that unmistakable, magic of Indonesia. 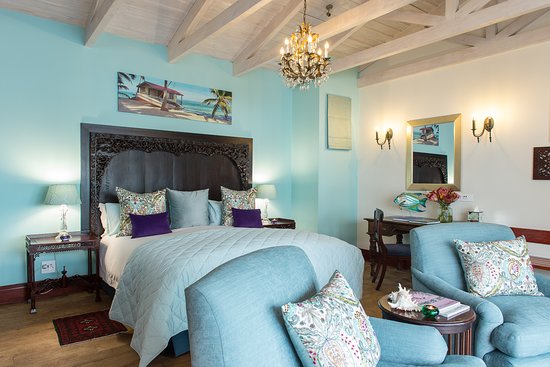 A Caribbean "shabby-chic", mainly blues but with exotic accents of pinks and yellows - this suite will appeal to those who have a sense of fun. A true Caribbean feel with bright colours of blue and yellow. 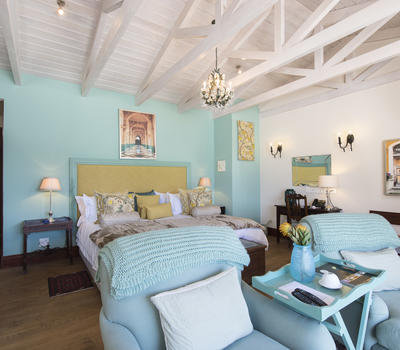 One of our continent’s most lovely and most popular East African island destinations, Zanzibar has a vibrant historical identity, which we have tried to emulate in the interior design with bright colours and unusual decorative pieces. This suite is accessible by wheelchair. 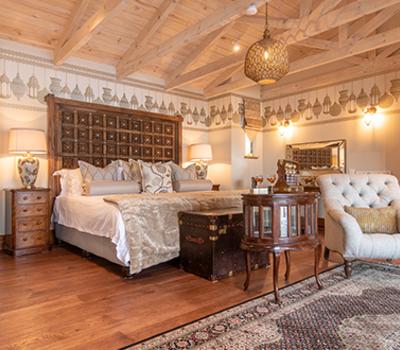 This spacious unit comprises two Island Suites (Elba and Corsica) joined by an opulent common living area. The suite, luxuriously finished and uniquely decorated in classic Tintswalo Atlantic style, provides a private refuge and exclusive accommodation for up to four guests at a time. 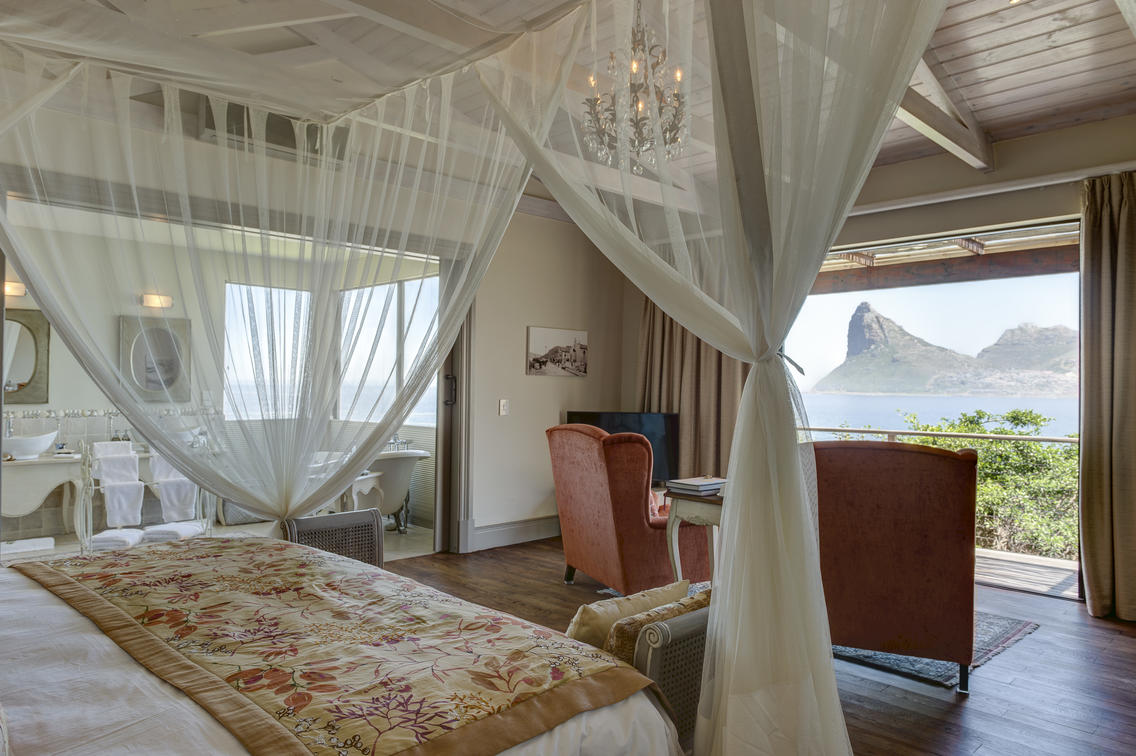 Madagascar, officially the Republic of Madagascar and previously known as the Malagasy Republic, is an island country in the Indian Ocean, approximately 400 kilometres (250 miles) off the coast of East Africa. At 592,800 square kilometres (228,900 sq mi) Madagascar is the world’s second-largest island country. Neighbouring islands include the French territory of Réunion, as well as the state of Comoros and the French territory of Mayotte to the north-west. The nearest mainland state is Mozambique, located to the west. 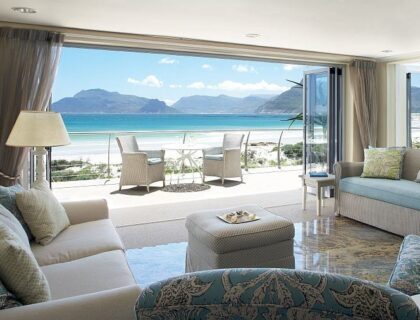 The Long Beach Hotel lies in the picturesque lobster-fishing village of Kommetjie on Long Beach itself with 8km of uninterrupted white sandy beach on your doorstep. This is about 40 minutes from... 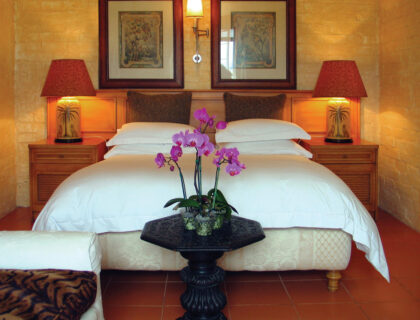 Colona Castle lies on a mountainside above a tranquil lake on the Cape Peninsula between Constantia and the warm water beaches of False Bay (St James & Muizenberg). This splendid Mediterranean...