The five star Radisson Blu Waterfront in Cape Town is set on the water's edge overlooking its own private yacht marina and Granger Bay with views out to Robben Island beyond. It lies adjacent to the vibrant V&A Waterfront in Cape Town, an easy 5-10 minutes’ walk away with complimentary shuttles also available.

The Radisson Blu exudes a relaxed charm: it has the feel of a luxurious beach hotel yet it is close to all the action of the city and the Waterfront. Standard rooms at Radisson Blu Waterfront face the city and Table Mountain, superior rooms have partial sea or marina views whilst the one or two bedroom suites have wonderful sea and marina views. All rooms have air-conditioning, telephone, satellite TV, high speed complimentary wifi, minibar, tea/coffee facilities (with espresso machines) and large bathrooms with large bath and separate shower.

The Radisson Blu Waterfront is designed around an atrium, so it has a light, spacious feel and the rim pool at the edge of the Ocean is particularly tempting, overlooking the Atlantic with the waves crashing against the boulders below. Other facilities include the well-known Tobago's restaurant for dinner or a casual lunch with its delicious buffet spread. Tables spill out onto the ocean view terrace. The pool terrace must be one of the nicest places to enjoy a cocktail at sunset with the sounds of the crashing waves on the breakers below.

The Quantum Spa at the Radisson Blu Waterfront is a great addition with ten treatment rooms, indoor vitality pool and fully equipped gym. Its signature 'One Journey' treatment is a series of pampering treatments to rejuvenate your whole body.

Children are very welcome and are accommodated on a sleeper couch in the one bedroom suites (two smaller children or one older child) or ideally in the Two bedroom suites. TGCSA 5 star hotel. 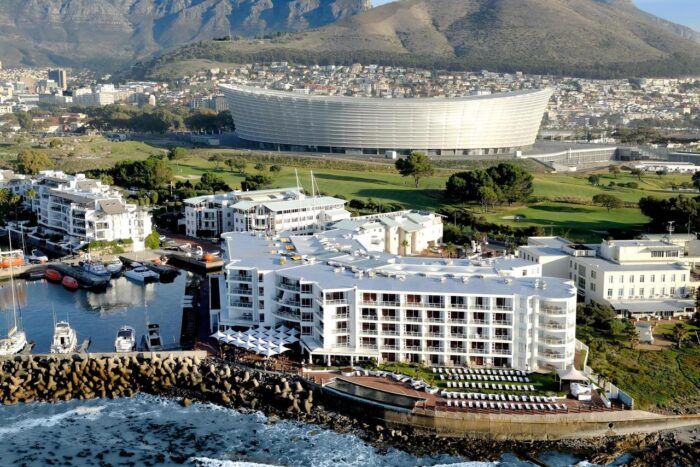 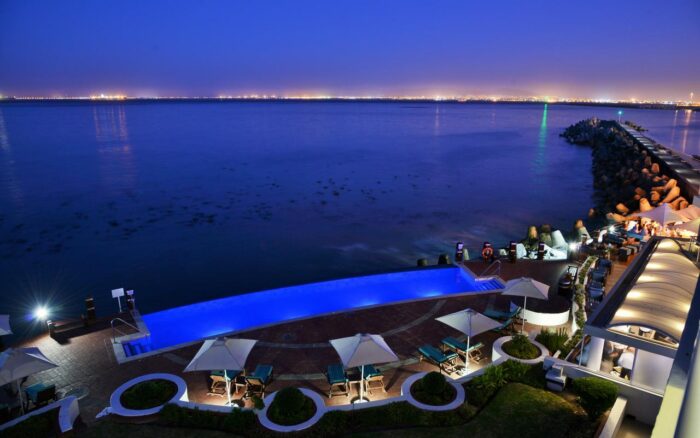 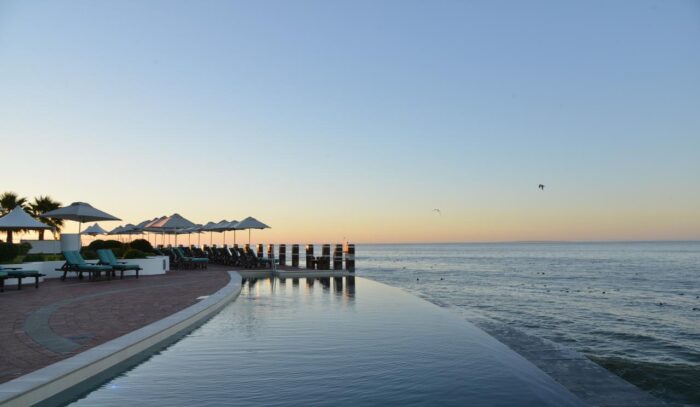 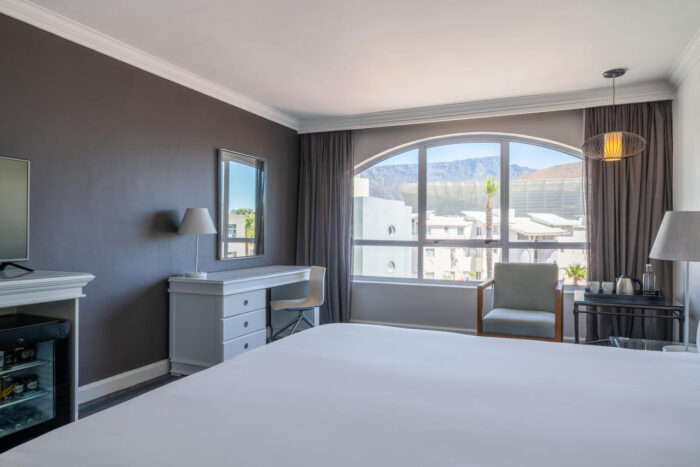 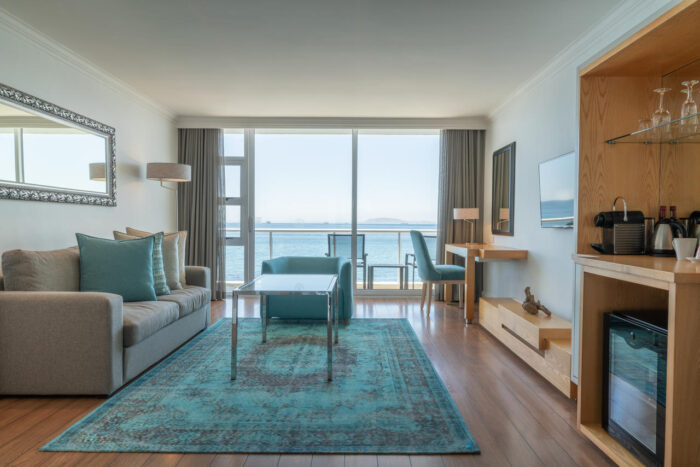 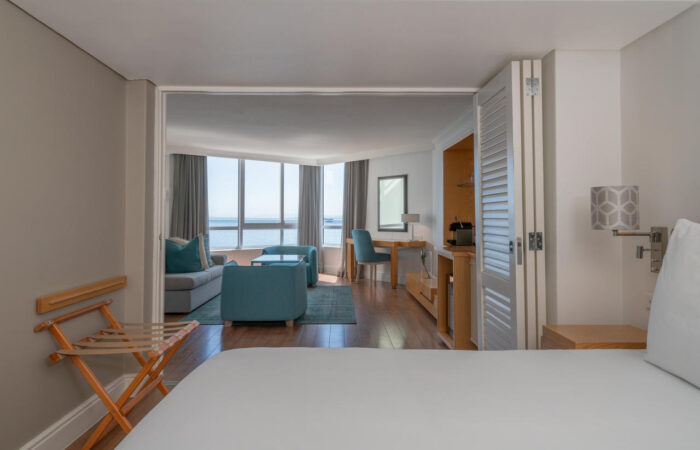 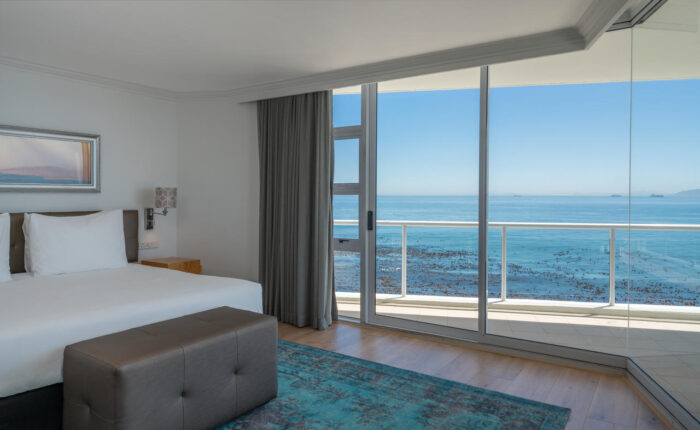 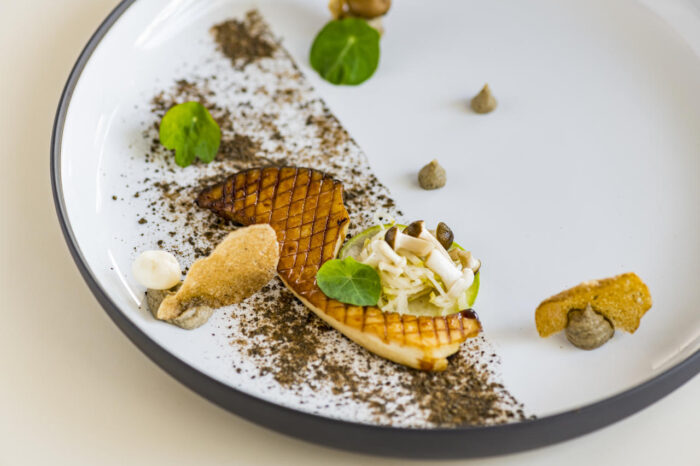 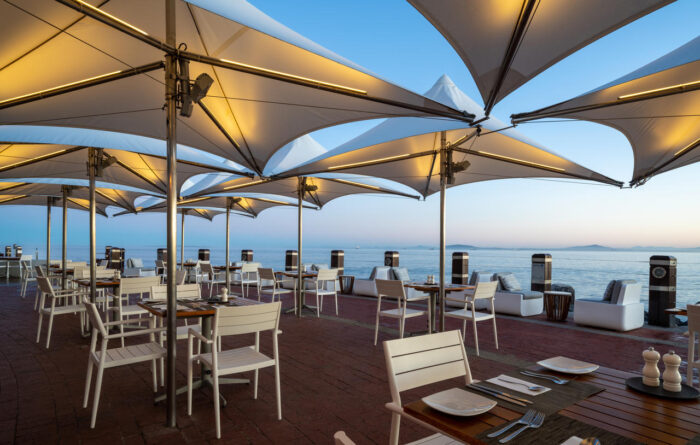 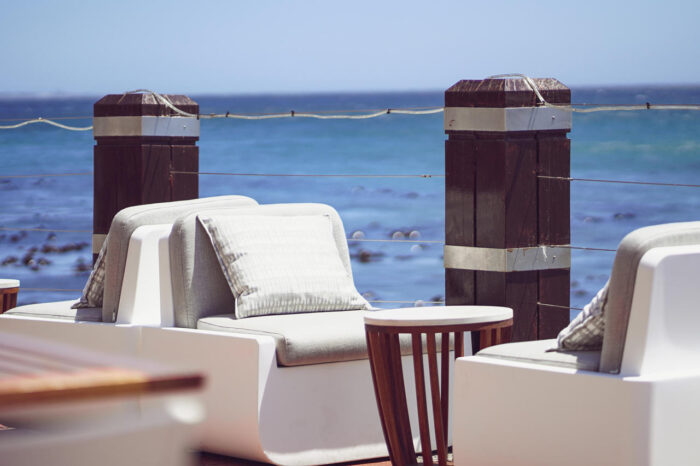 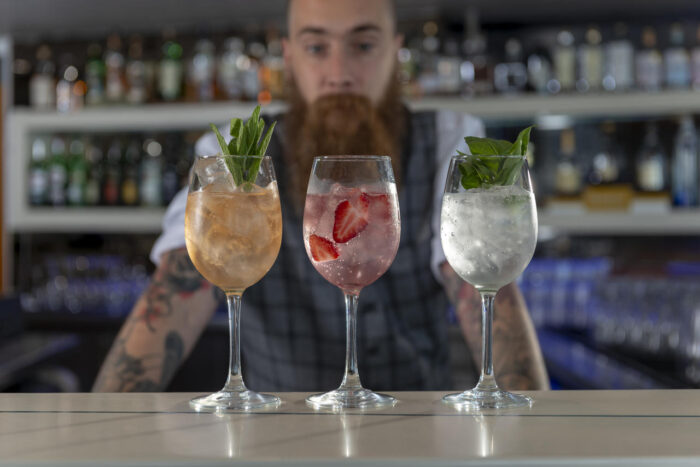 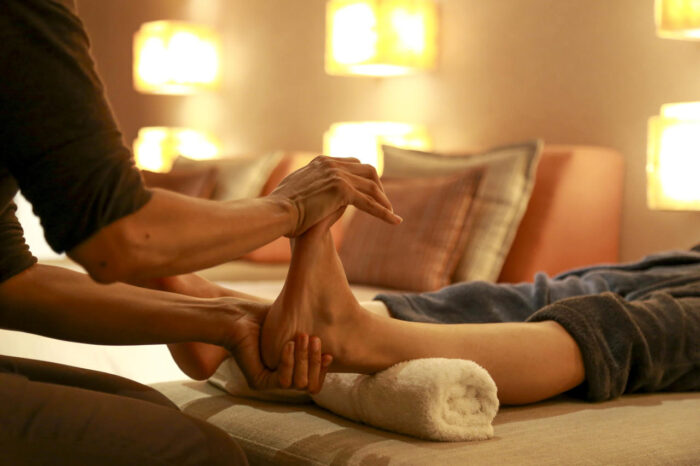 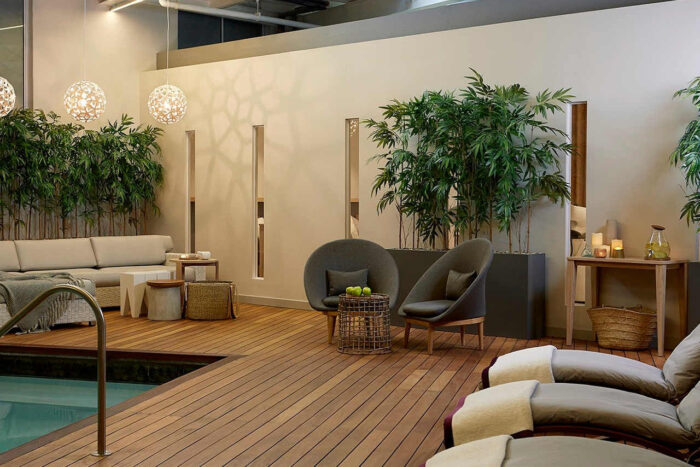 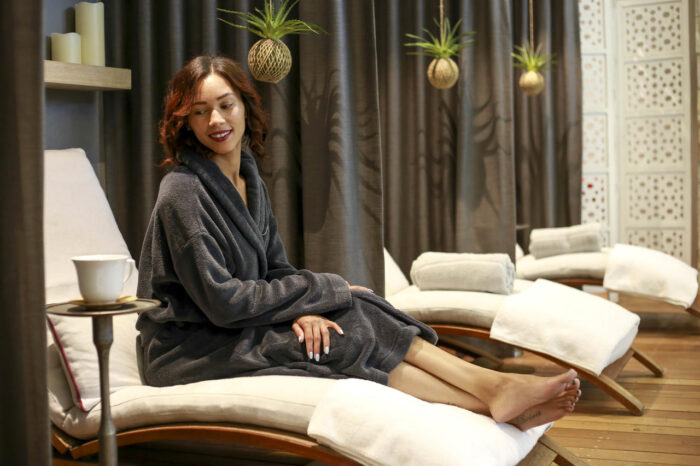 Approximate room size: 36 – 45 m2 | Maximum number of guests: 2 adults With the option of a sea facing or non-sea facing room, guests can enjoy a bath and or shower, get comfortable in a bathrobe and slippers while sipping on a cup of coffee or tea or cool down with a drink from the mini bar. Staying connected is easy with free Wi-Fi. 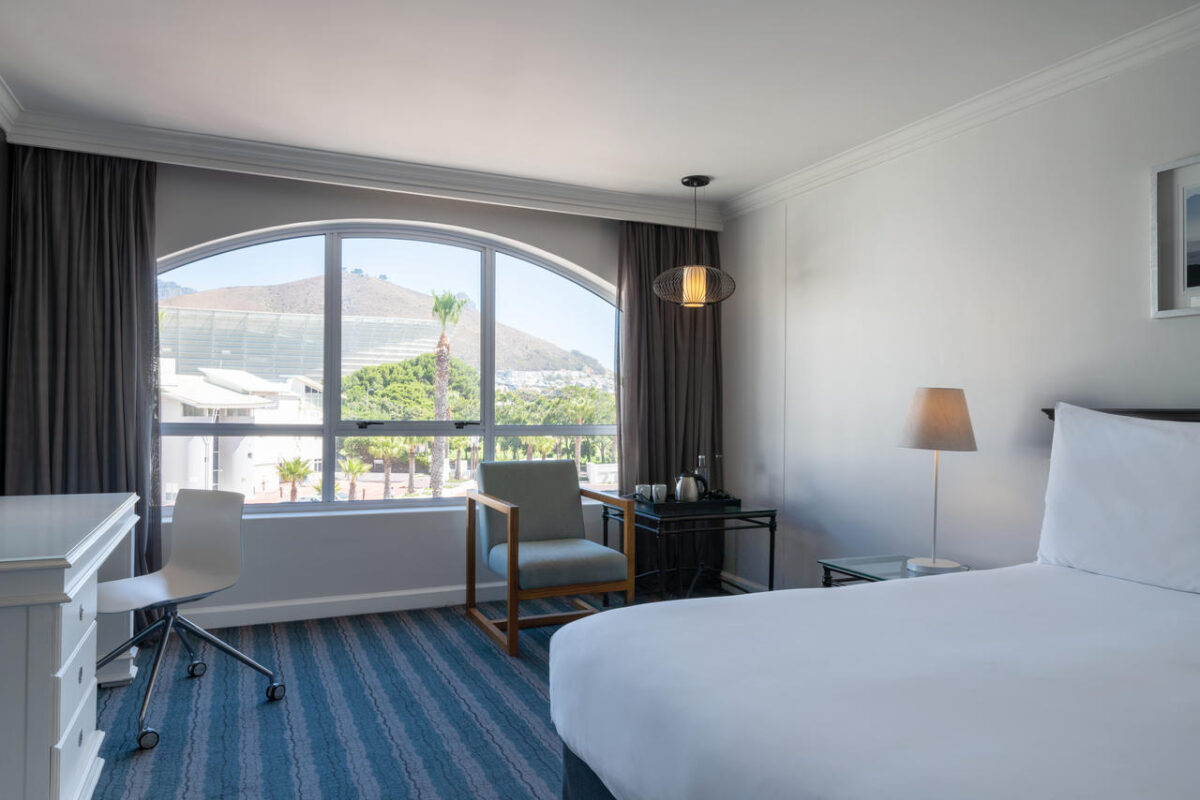 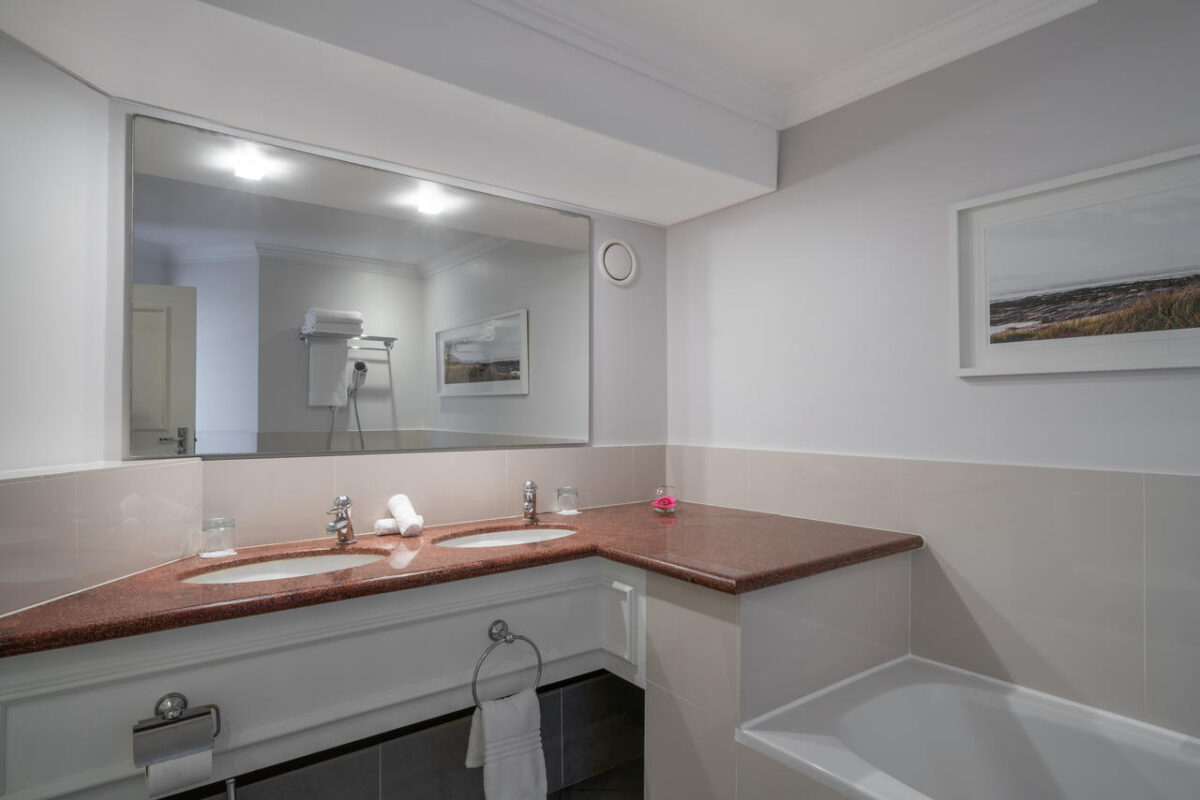 Approximate room size: 45 m2 | Maximum number of guests: 2 adults Enjoy more space and views of the marina or mountain from a Superior Room, which includes all the amenities of a Standard Room as well as a private balcony and a complimentary Super Breakfast Buffet. 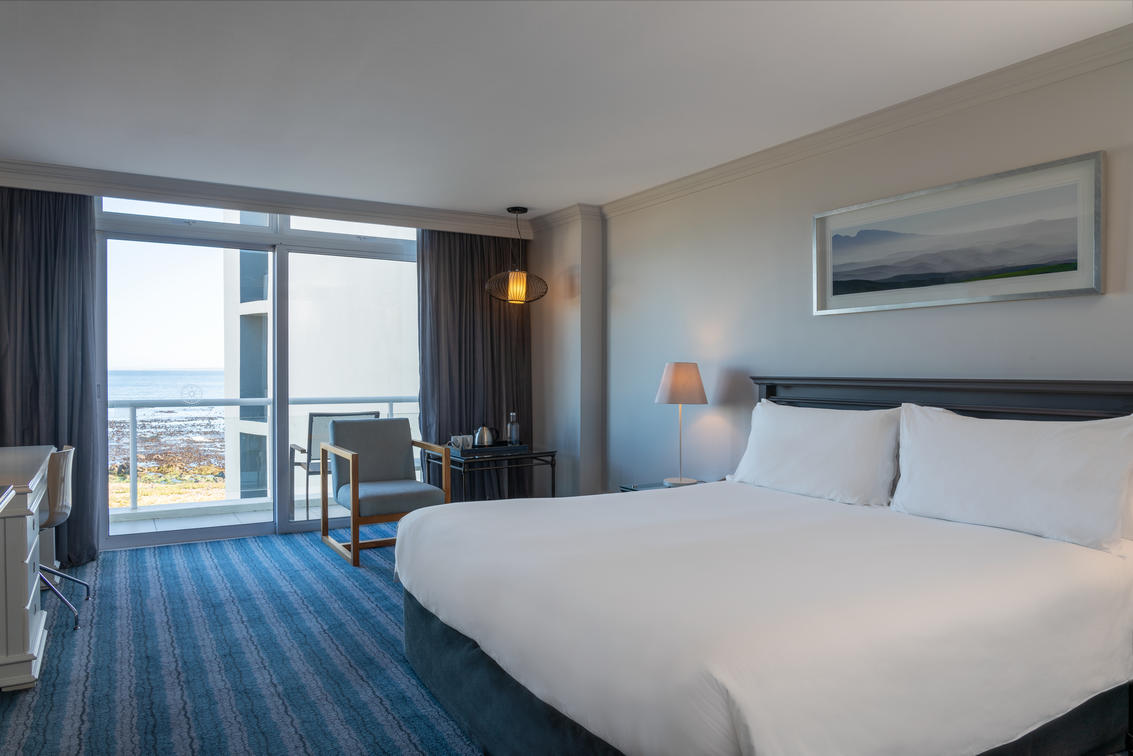 Approximate room size: 55 m2 | Maximum number of guests: 2 adults and 2 children under 12 years Take your stay to the next level with the spacious Premium Room, which offers the amenities of a Standard Room plus several extras. Watch the waves crash on the shore from the private balcony that overlooks the Atlantic or marina, while enjoying a hot drink from the in-room Nespresso® coffee machine. These rooms also have a sleeper sofa to accommodate children. 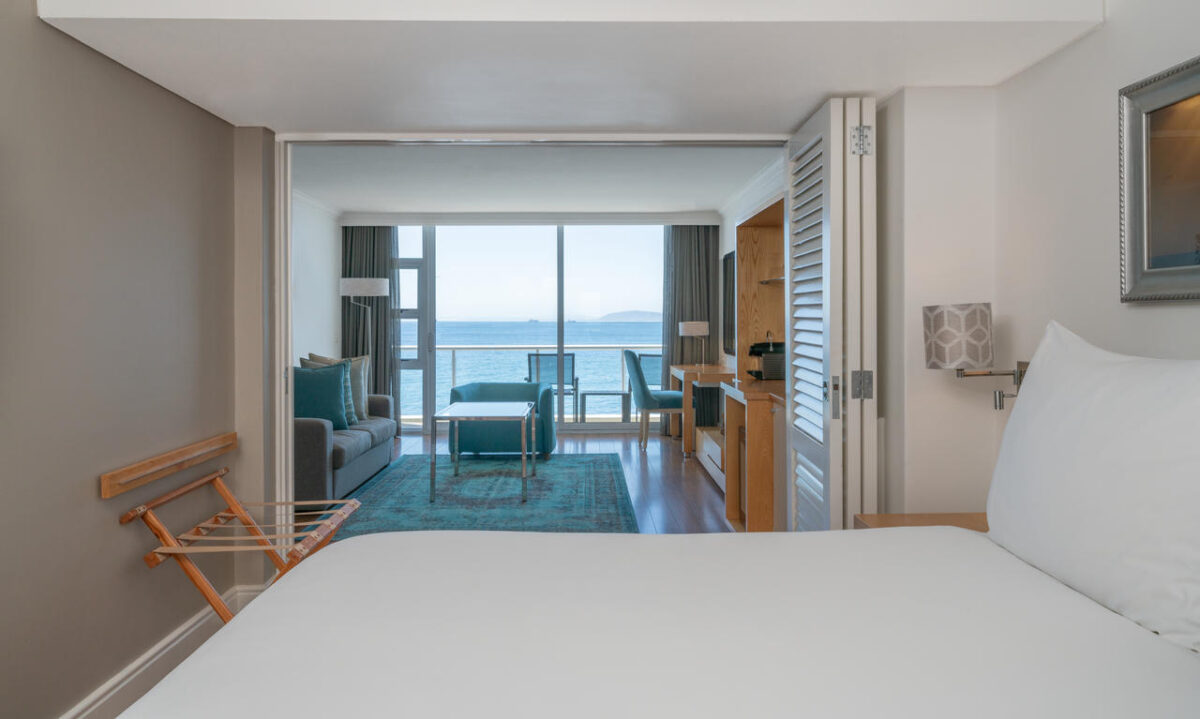 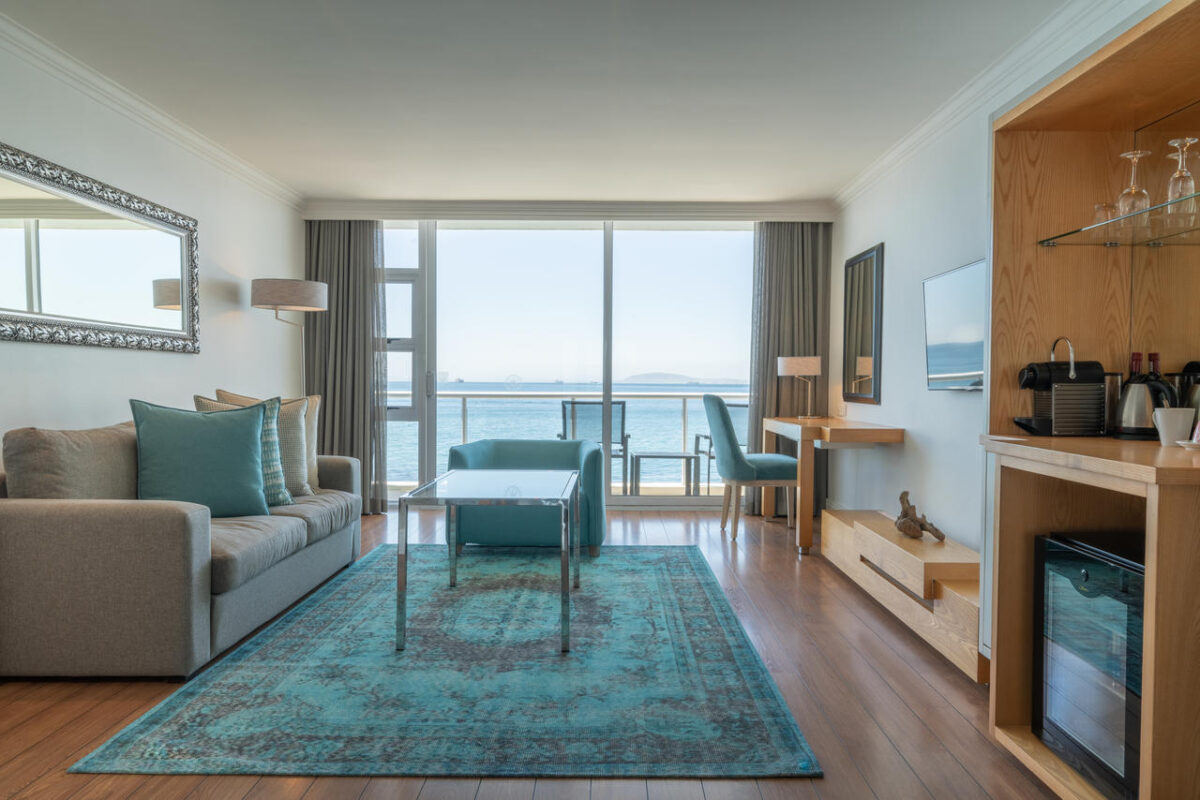 Approximate room size: 55 m2 | Maximum number of guests: 2 adults and 2 children under 12 years The ground floor Family Room offers the amenities of a Standard Room plus several extras. Look out over the lawn to the Atlantic Ocean on your private terrace, while you enjoy a hot drink from the in-room Nespresso® coffee machine. These rooms also have a sleeper sofa to accommodate children. Guests can also enjoy a complimentary Super Breakfast Buffet. 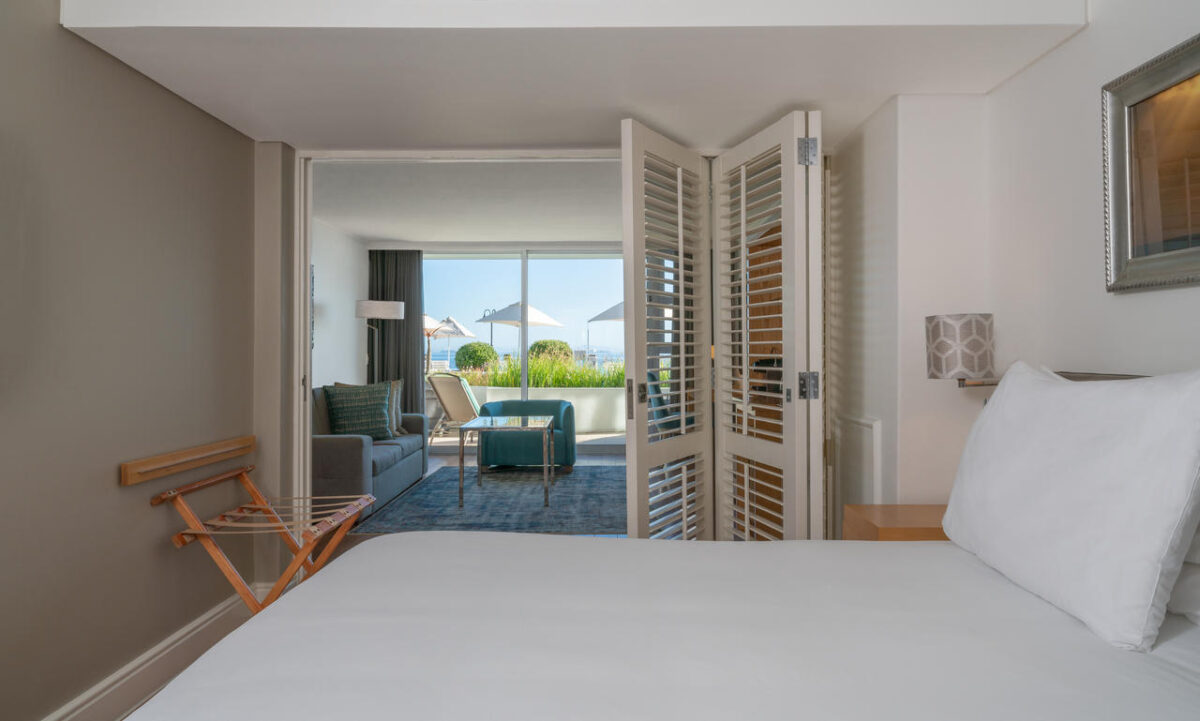 Approximate room size: 55 m2 | Maximum number of guests: 2 adults and 2 children under 12 years With all the amenities of the Premium room, the spacious Junior Suite has a private balcony, where guests can enjoy looking out over the Atlantic Ocean or marina. These rooms also have a sleeper sofa to accommodate children. 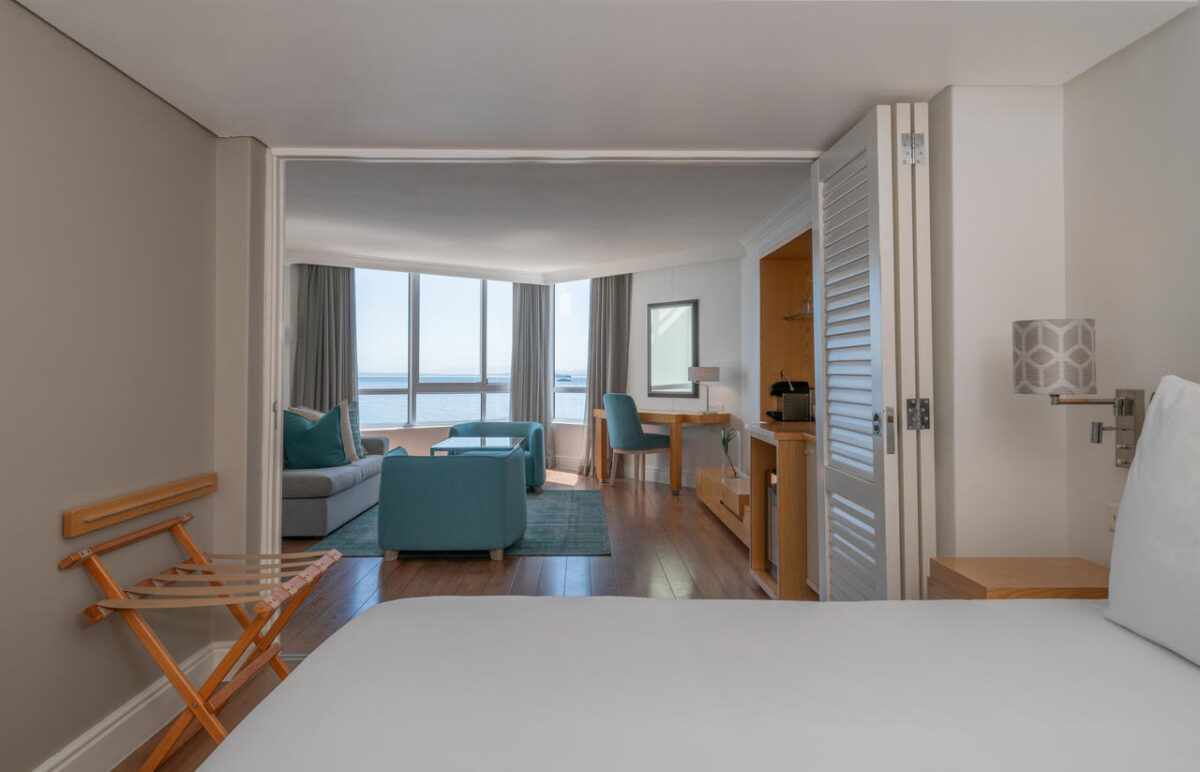 Approximate room size: 110 m2 | Maximum number of guests: 4 adults and 2 children under 12 years For large groups or an extended stay, the Suites are ideal, giving guests all the amenities of a Premium Room plus lots of extra space. Each suite includes 2 bedrooms with their own bathrooms, a private balcony, a separate lounge and dining area and a fully equipped kitchenette. 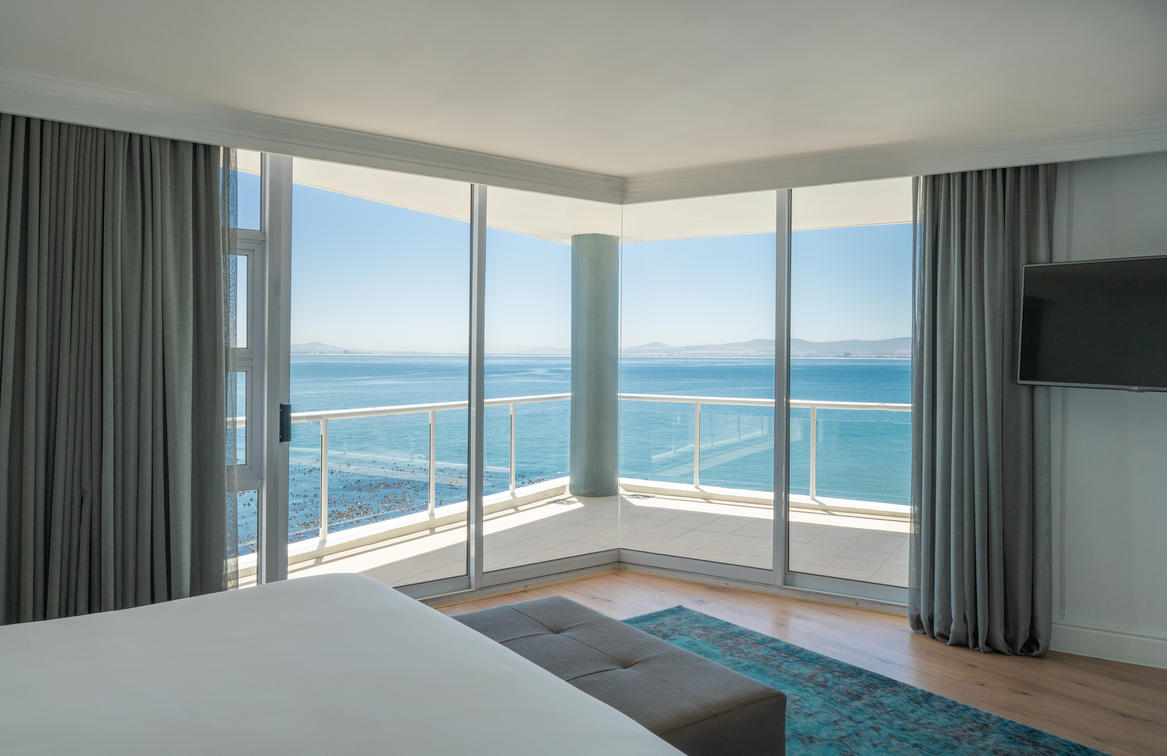 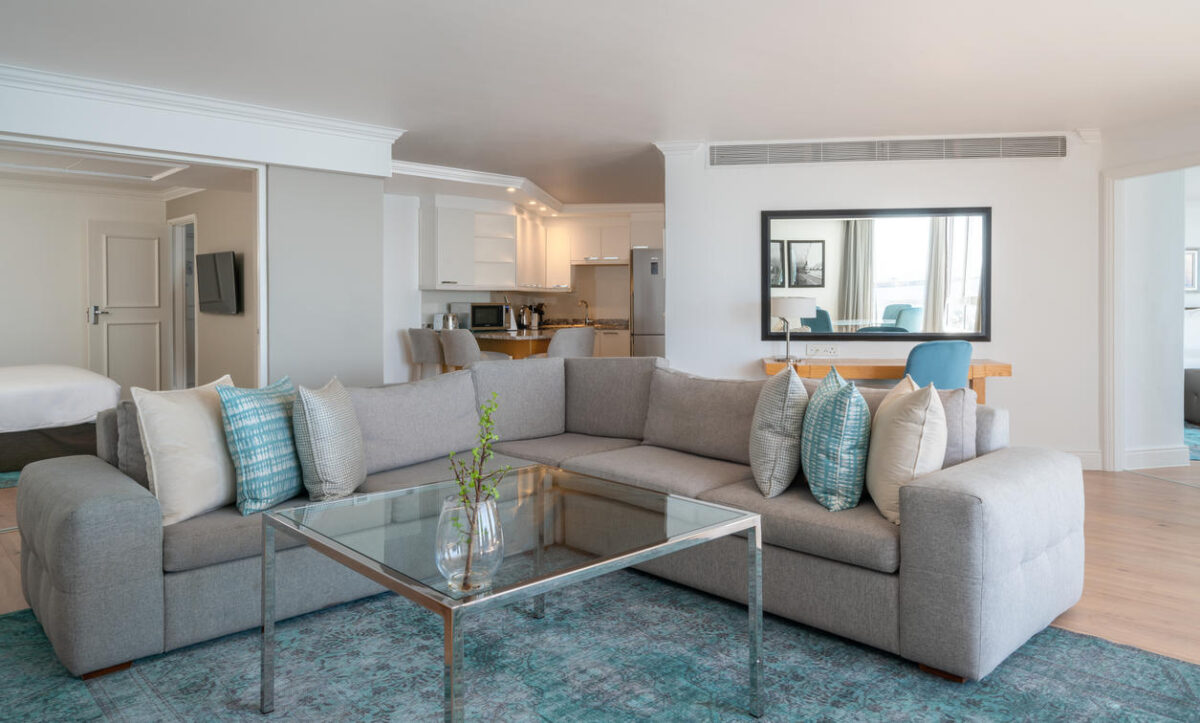 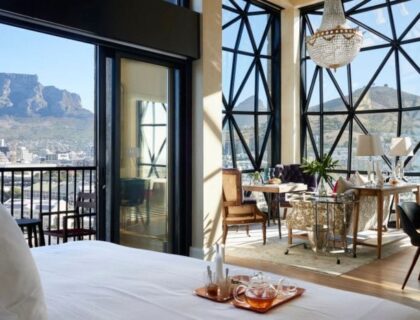 The Silo is a magical and iconic hotel towering above the V&A Waterfront. The natural wonder of the Mother City of Cape Town surrounds the hotel. It shares this magical space with the Silo Museum.... 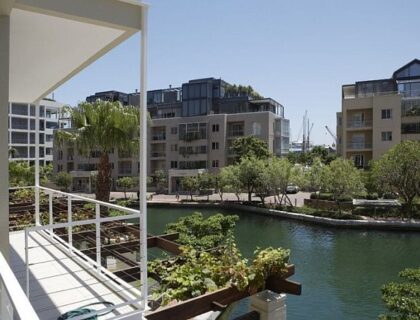 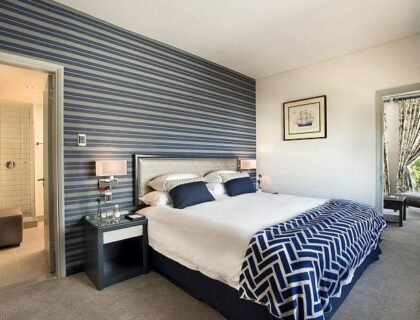 The 4 star Portswood Hotel in the V&A Waterfront is part of Cape Town's colonial history. The restaurant and lobby are built over the original well and holding cells for prisoners en-route to...