Sausage Tree Camp is situated in the heart of the Lower Zambezi National Park in Zambia on the banks of the glorious Zambezi River. Sausage Tree Camp is perhaps the most romantic of all the Lower Zambezi camps and thus particularly recommended for honeymoons in Zambia. The main lodge is open plan under an extensive canvas with an expansive teak deck overlooking the Zambezi river - perfect for sundowners. The 25 metre lap pool is idyllically situated right on the edge of the riverbank, under shading Mahogany trees with outstanding views. Sun loungers are on hand for relaxing during the heat of the day.

Sausage Tree Camp has seven white Bedouin-style tents and the Kigelia Suite. All are spacious and uncluttered with solid Zambian teak furniture and four-poster beds decked in pure white linen. Sliding doors lead out onto a private deck with river views. Each has a charming open-air en suite bathroom. A Muchinda (private butler) is on hand to assist you. Nearly hidden from one another, and shaded by mature Sausage and Mahogany trees, the tents are cool, private sanctuaries to return to for an afternoon siesta. They are generously spaced along the Zambezi River bank allowing the elephants to amble in between. (You need to allow 5 minutes to walk from the furthest tent to the dining tent!)

The two luxurious tented honeymoon suites at Sausage Tree Camp each have an enormous four poster bed and both indoor & outdoor bathroom. Each has a private pool set into an expansive teak deck.

Kigelia House is a private villa with two bedrooms, perfect for two couples or a family. The en suite bedrooms are separated by an open plan living area which leads onto a private teak deck and pool.

Activities are extremely flexible at Sausage Tree Camp. With a range of guides, vehicles and boats available, you can choose what game activity you want to take and when – you don’t have to fit in with other guests’ plans. Choose between game drives, night drives, bush walks, boat cruises, canoeing amongst the hippos in the Chifungulu channel or trying your luck at tiger fishing in the Zambezi River (on a catch and release basis). You can sometimes combine activities at Sausage Tree Camp taking a one hour canoe trip at sunset prior to a night drive for example.

Good food is also an important part of any stay at Sausage Tree Camp, with delicious lunches in a variety of settings. Sundowners are enjoyed watching the sun set over the Zambezi escarpment of Zambia from the deck. Dinner is served by candle light in the open air dining tent, by star light on the deck, by moonlight on an island in the Zambezi, by campfire light deep in the bush, or by lantern light in the privacy of your own deck. There is a silent generator available for 24 hour power. 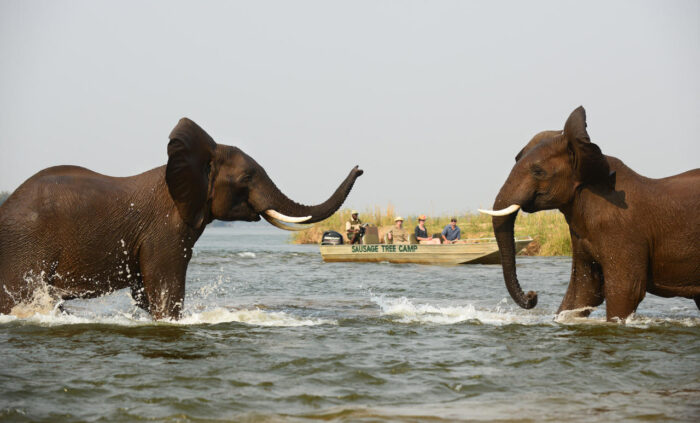 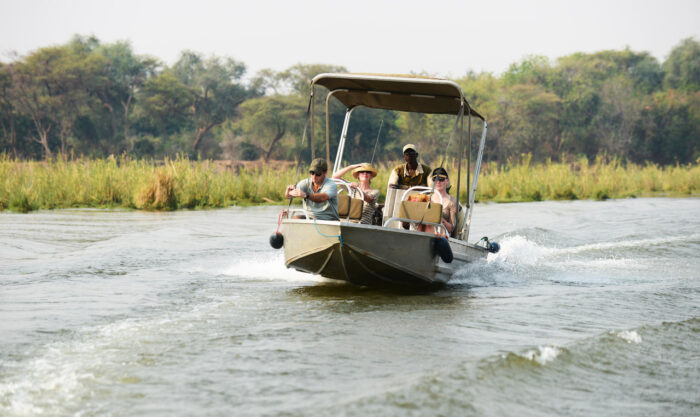 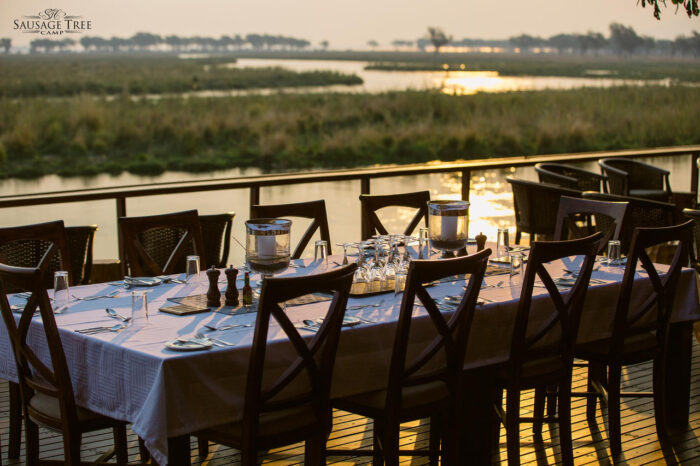 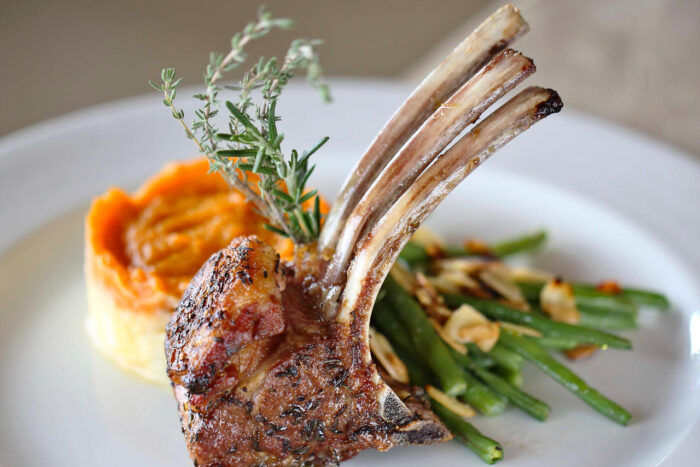 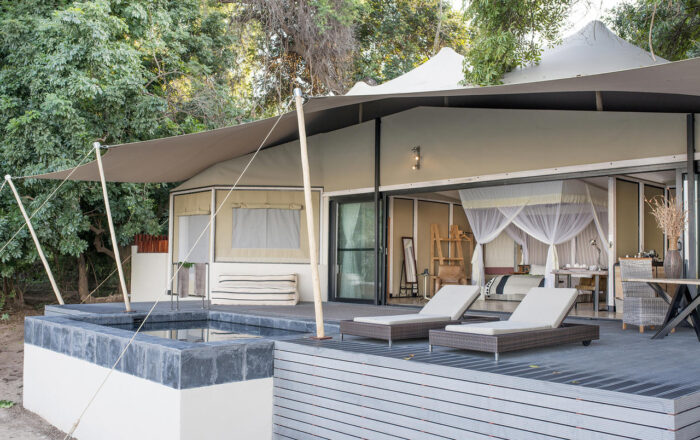 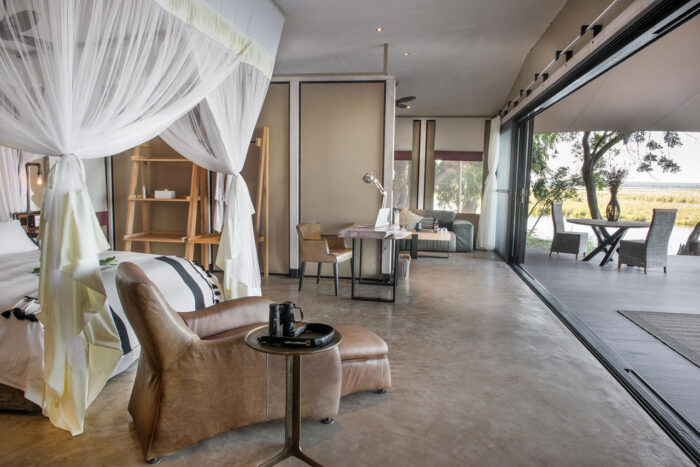 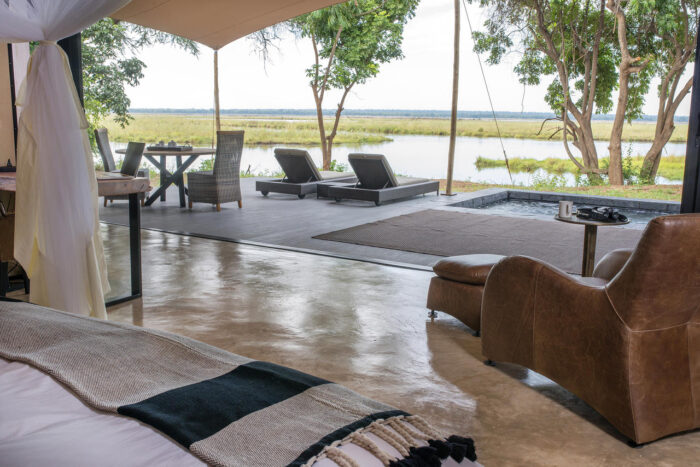 Sausage Tree Camp on the map

Each tent has its own personal Muchinda (butler) to attend to your every whim. All tents have 24 hour power and plentiful hot and cold treated water. 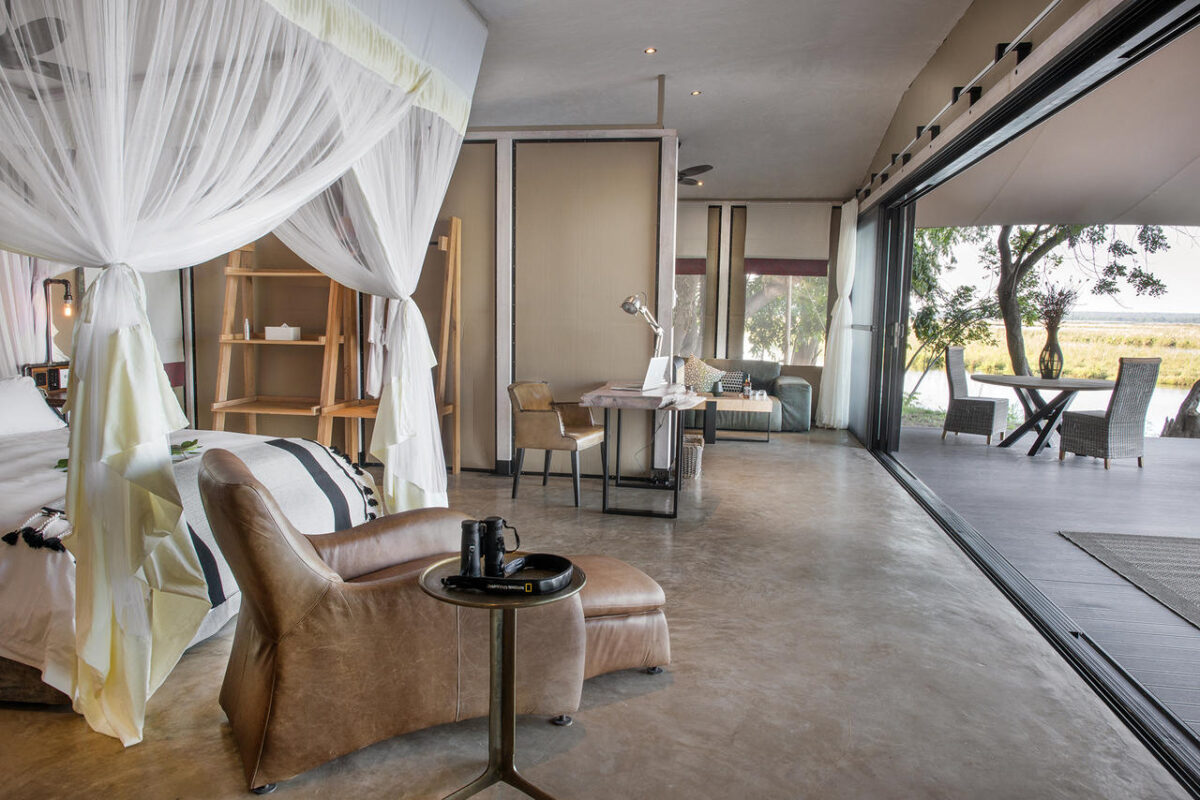 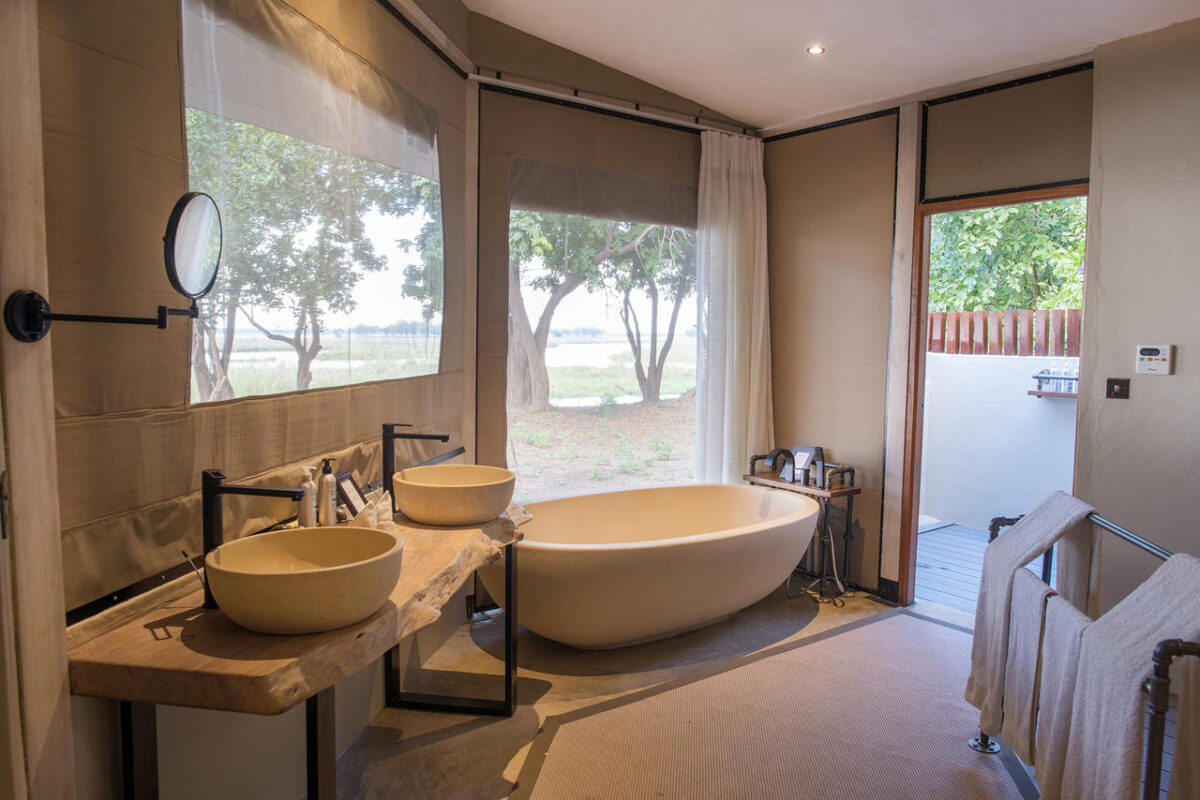 Kigelia House is the perfect choice for small groups or families, with two en-suite bedrooms separated by an open plan living area leading onto the private deck and pool.

Each tent has its own personal Muchinda (butler) to attend to your every whim. All tents have 24 hour power and plentiful hot and cold treated water. 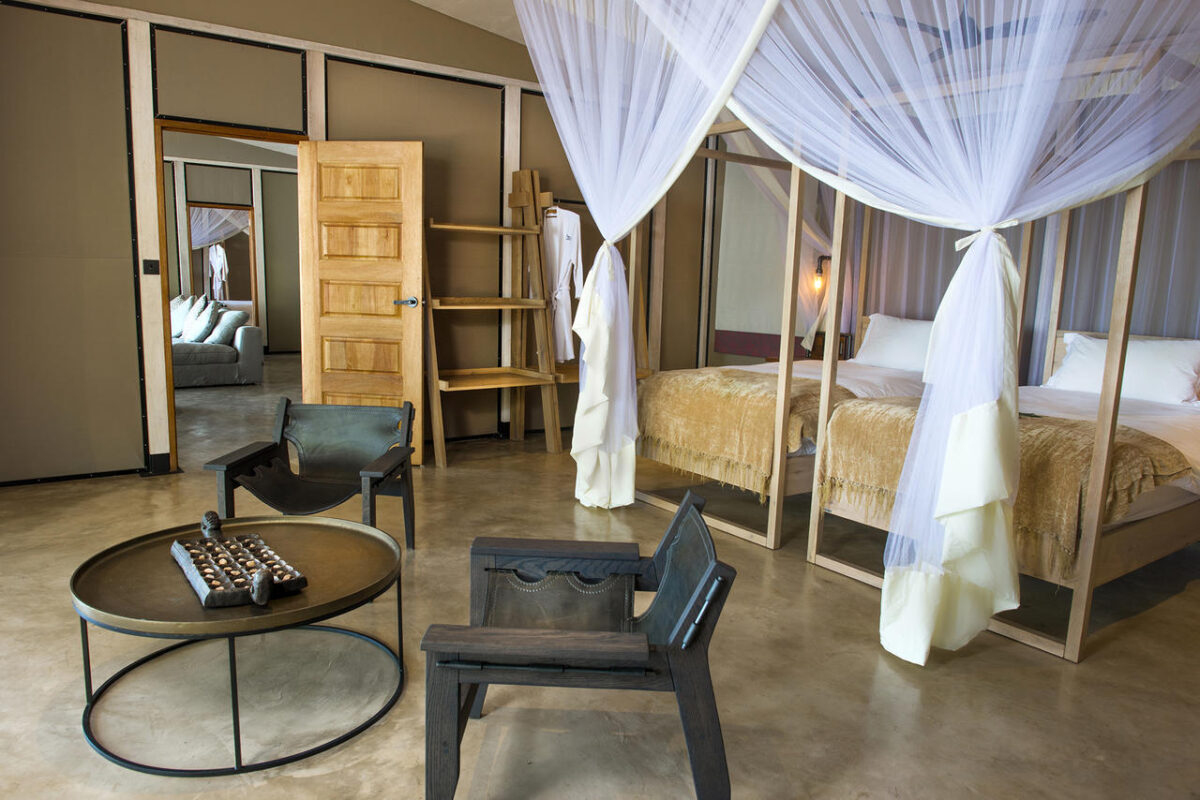 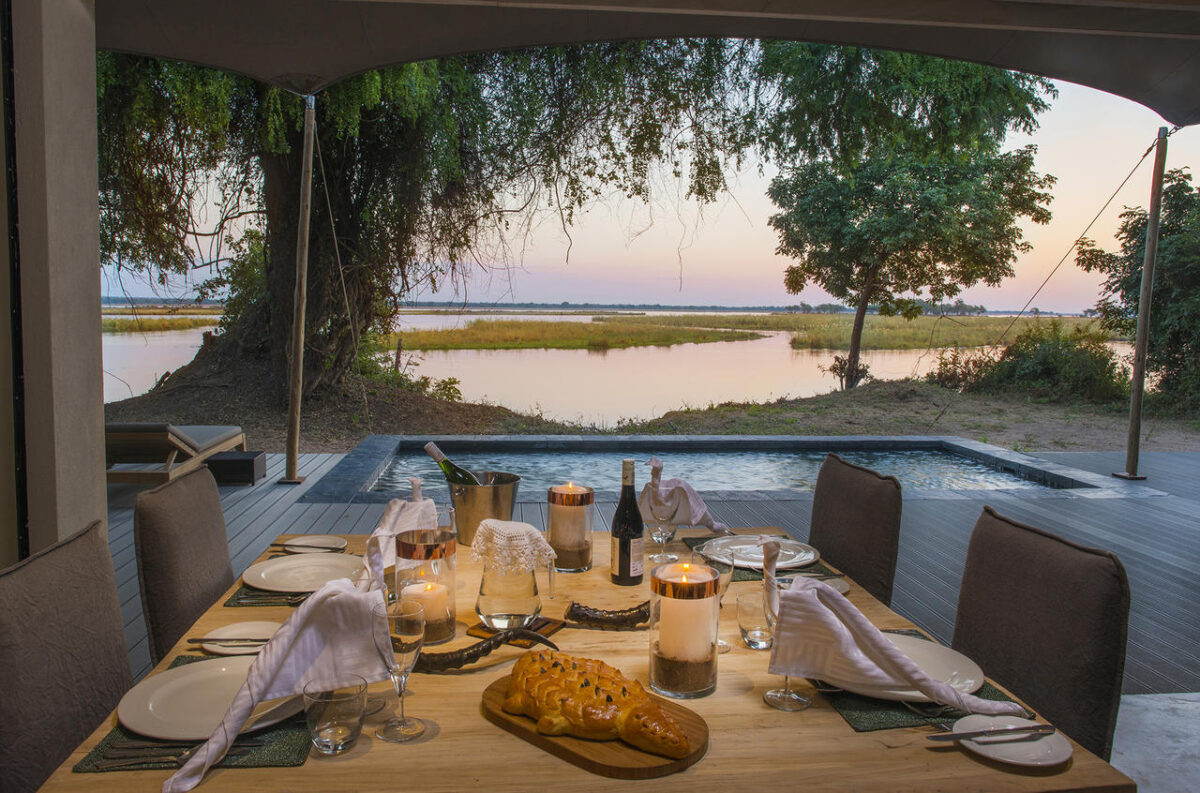 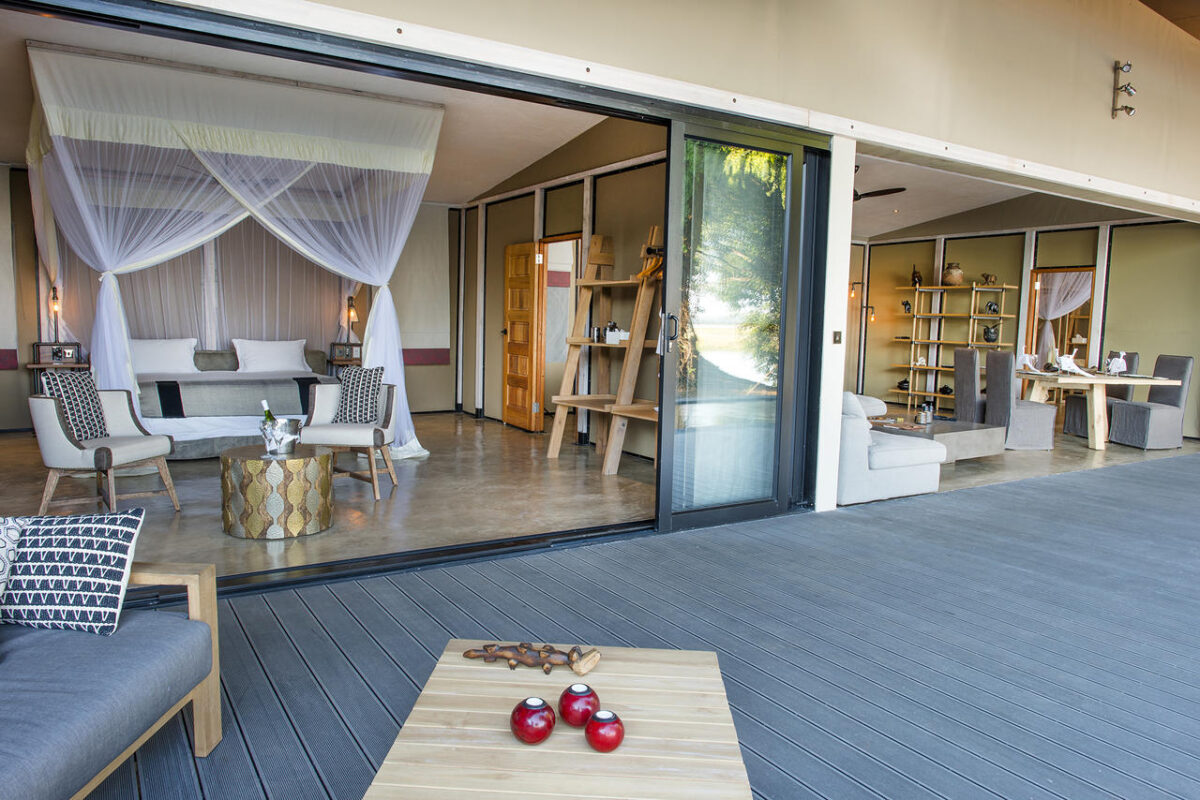 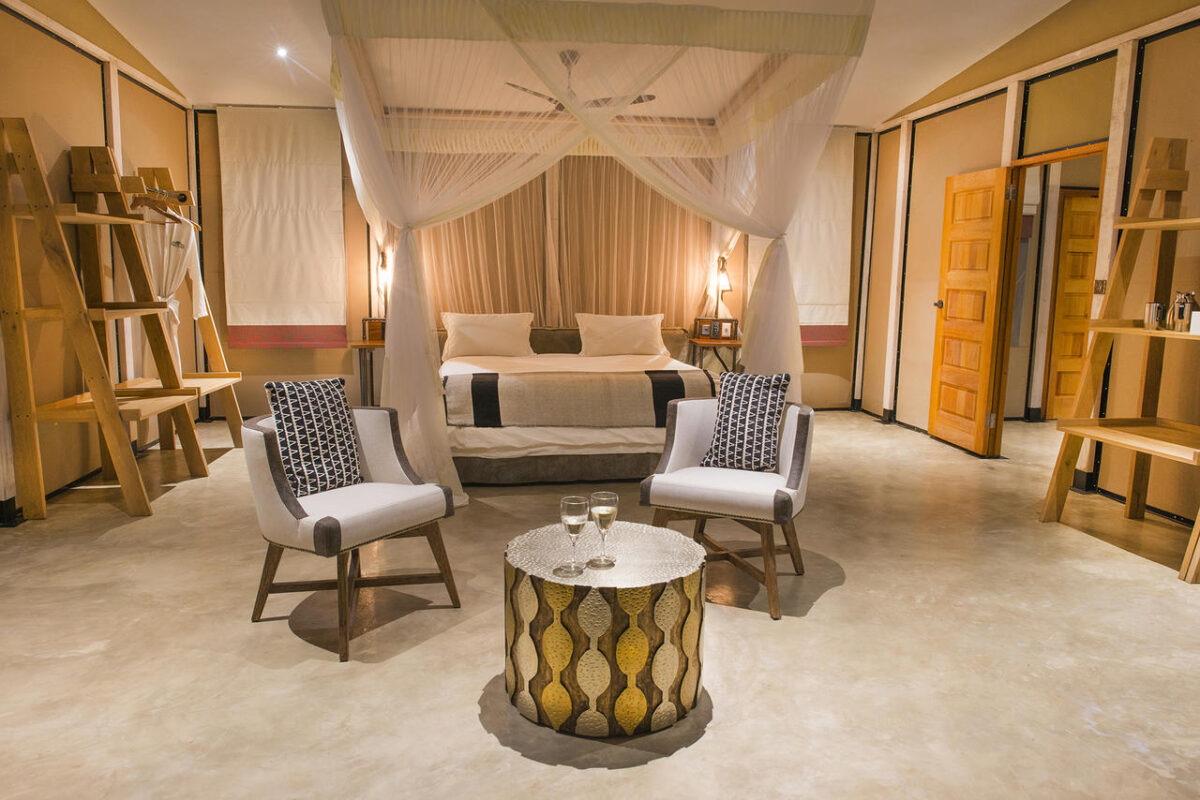 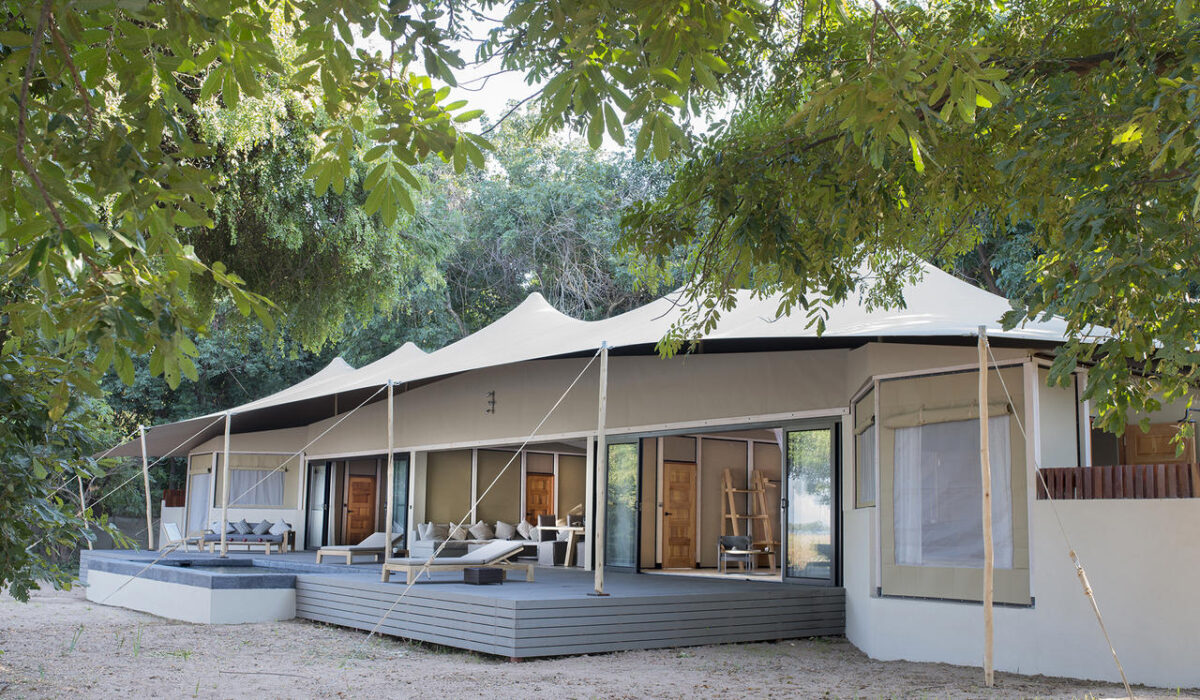 The flight from Lusaka (where I connected after flying in from Mfuwe) to Lower Zambezi was quite interesting! The aircraft is a Britten-Norman Islander. Still produced today, our example had obviously seen many years of service, but was reassuringly solid and simple. I think they like it because of the short and steep take-off and landing (I read now that they only need a rough airstrip of 350m – a short par 4!). Anyway, the flight was stunning. The view of the Zambezi as we approached Royal airstrip was sensational. Even better was my 10 minute flight to Jeki for my stay at Old Mondoro. Flying right over the river looking down on loads of hippo and ellies – unforgettable.

I was incredibly lucky and had Old Mondoro completely to myself – early season and no other guests. This gave the South African host couple plenty of opportunity to charm me with their hospitality, which they did admirably. Beukes is a well-seasoned guide/ camp manager and Jacomina is fairly new to the business – married Beukes and learnt the trade – but a natural. Very genuine hospitality and I very much enjoyed the stay.

Also a really beautiful, peaceful part of the river. And the small scale of the camp enhances the tranquility and the “getting away from it all” feeling. Mainly use only 4 tents with a fifth pressed into service for groups. Tents 1 – 3 along main stretch of river. My tent – number 3 – best I think as it is also on the corner of a small side channel. The “honeymoon” tent is a bit further up the side channel so you don’t get the fab views of the main river.

Very atmospheric at night with heaps of kerosene lanterns on paths and in tents.
But the tents DO have electricity and hot water on demand. Each tent has a lovely deck with a kind of sofa/ bed for chilling out. Fantastic birding from my tent. Overall everything just felt pristine.

My guide was Levy, who I thought was exceptional. Urbane, relaxed, confident and easy to talk to not just about the game but Zambia/ safari/ Africa in general. And he found us a leopard on our evening game drive – beautiful sighting of a male about 15 feet away moving through some scrubby trees. Magic!

And now it all got a bit James Bondy! The preferred mode of getting between the lodges in the Lower Zambezi is fast motor boat. Soon after I had clambered aboard the aluminium speed boat we were skimming across the surface of the river, past pods of hippos and huge crocs sunning themselves on sandbanks.

Sausage Tree Camp definitely lived up to its billing in terms of accommodation, service, food, activities and atmosphere. It’s a very well run camp that manages to be both super-efficient and reasonably easy going at the same time. They really like to mix up the dining locations (main area/ island location/ table and feet in the water on a sand bank) etc. food probably best I had on whole trip. And seemed to attract very pleasant guests, or maybe I was lucky. Felt very comfortable here.

I had one of the honeymoon suites which was huge! Some guests had to be driven back to main area for lunch when ellies paid a visit.

Had an evening game drive which was good if a little quiet – big-cat-wise anyway. But did have a nice zebra sighting at dusk and of course lots of hippo in river. Also saw an African Wild Cat. Plus lots of Civets and Genets.

But the real highlight was the canoe trip through the Chifungula Channel. This runs for about 13 – 14 Km in a loop off the main Zambezi, and the starting point is only a couple of hundred metres downstream from the Camp. So at about 07:00 you paddle off from the Camp and turn into the channel. I was the only guest doing it that morning, with Sebastien my guide in the back of my Canadian canoe and Honesty in the “support” canoe. I’m not a great swimmer and for obvious and very real reasons nervous about canoeing next to hippo and crocs but knew I really wanted to do it and was not disappointed. Three middle aged but very intrepid female American Agents had done the trip the previous 2 mornings and raved about it.

It typically takes about 4 hours to emerge at the other end of the channel but we did it in approx 3.5 including a stop on land for coffee and cookies. The channel is very shallow, but with some deeper areas where the hippo like to hang out. At one point my guide had to drag the canoe over a sandbank. We saw pied kingfisher, African fish eagle, goliath heron and more. Plus of course many many hippo and quite a few crocs. It was a little scary getting so close! But an absolutely unforgettable experience.
Just before the end of the channel we came across a lone bull elephant digging in the cool sand by the channel edge for water, with a small flock of yellow-billed storks in front of him.

A motor boat meets you where the channel rejoins the Zambezi and you speed back to camp, towing the canoes. I really had to pinch myself as I clambered into the boat and looked back to where we had just come from. I had a very strong sense of having emerged from a lost world, and couldn’t quite believe what we had just seen and done. Truly one of the most amazing things I have ever done.

Long stay Offer Stay at the Sausage Tree Camp or Potato Bush Camp  for 5+ nights and the 5th night onwards will be 50% off. *This offer IS combineable with the free flights offer 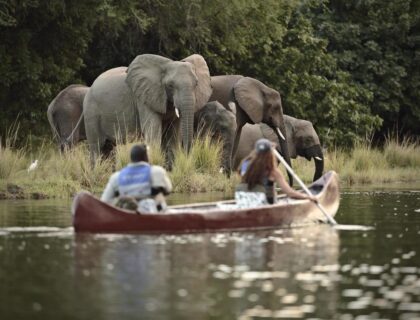 Chongwe River Camp lies on the confluence of the Chongwe & Zambezi Rivers, on the edge of the Lower Zambezi park, under a canopy of Albida thorn trees. This unpretentious and friendly little camp... 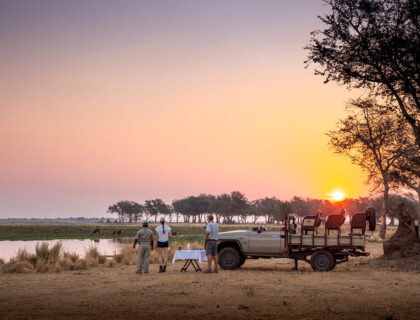 Chiawa Camp is one of the original camps in the Lower Zambezi and has been run by the Cummings family for years. Here it’s all about the bush, the river, the wildlife and safari activities... 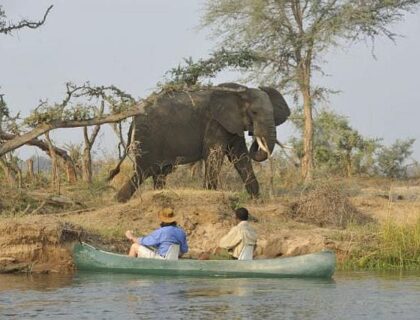 Potato Bush Camp lies in the heart of the Lower Zambezi National Park with a stunning panoramic view overlooking the Zambezi River. The camp nestles under mahogany, sausage, winterthorn and acacia...